December is always a busy time at Esperanza Verde with Saint Nicolas, Christmas and New Year. Christmas presents came early for us with a new baby spider monkey being born and the arrival of a juvenile kinkajou.

This month saw a new arrival when Cumala (Black faced spider monkey) gave birth! We haven’t been totally sure about her being pregnant after her time with Rimaq and Lucio. The volunteers were delighted when they woke up to find a small baby attached to the side of Cumala. The baby has been named Chula and is a female. 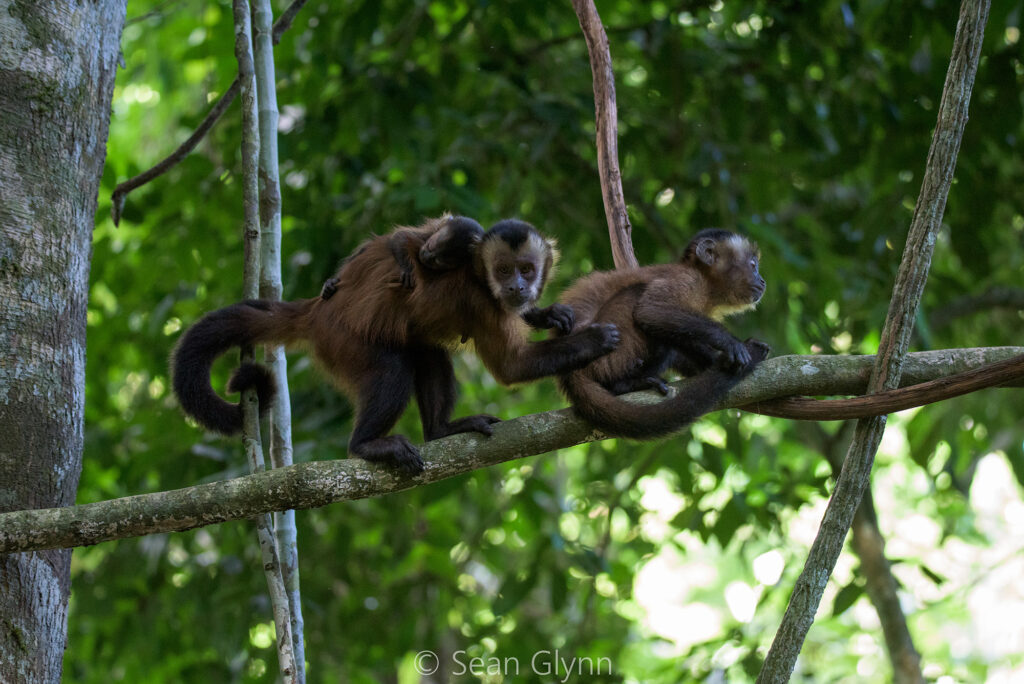 Last month we saw Nera give birth to her second baby Nawi. They are seen a lot and are doing very well with the group of capuchins which is continuing to go further away for longer periods of time with the lead of the wild male Macu.
Daytona (young female large headed capuchin) was released this month to join the other monkeys outside. After spending time acclimatising in Pepe cage she was ready to go outside and has been playing with the other monkeys. She is doing well and socialising with the other monkeys but still every now and then sleeps in Pepe cage with the other baby monkeys. Her introduction was without problems and the monkeys were quick to accept her within the group. At the end of the month we decided to move her to the clinic to socialise with Ezra (a young female white fronted capuchin) to aid in the introduction of her to the group. 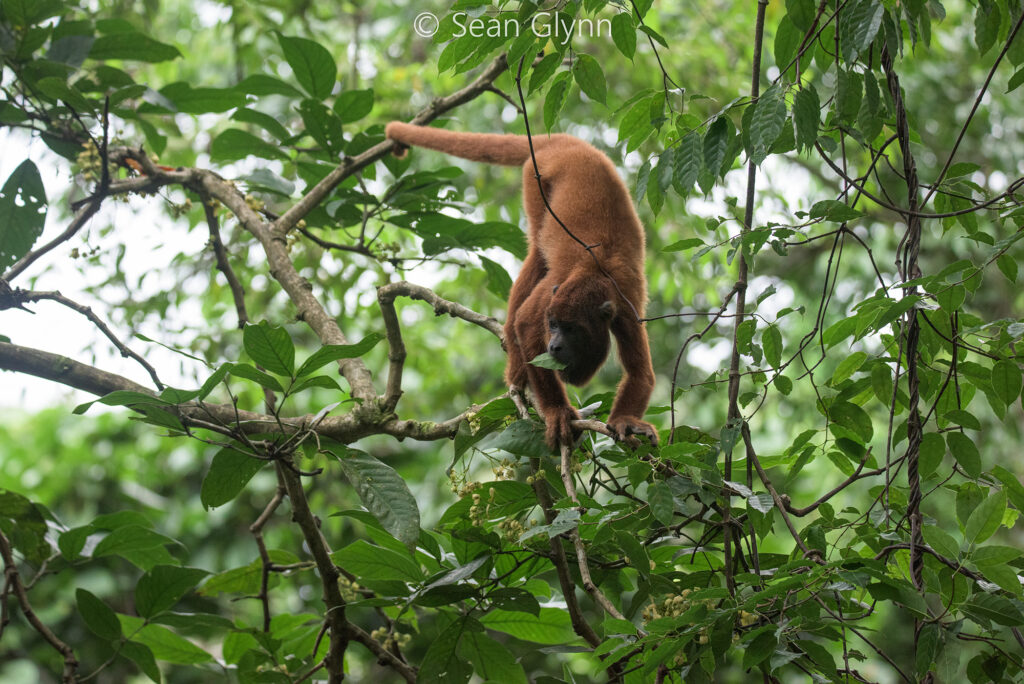 Armando, Ramon and Darwin (male Howler monkeys) continue to put on weight and play with the other monkeys outside. As howler monkeys are more sensitive than the other species they spend their nights in Arana cage with a diet rich in fresh leaves picked by volunteers on a daily basis.

This month was not all great news and we unfortunately lost one monkey, Tito (saki monkey). He was found under the volunteer house one morning after a volunteer was looking for materials for construction. His necropsy was unfortunately unable to find a cause of death. The other saki monkey, Yuria, is still doing well and has been seen often interacting with the other monkeys.

Diego (young male margay) has been cared for by the family at their house for several months. As Diego will never have a chance for release, being raised from so young by humans, it was important to socialize him sufficiently with humans and offering him enough space for growth. This month we decided to introduce him to Grety, the female margay in Zambo cage. Introduction of animals can be problematic; however, Grety was accepting of Diego and their initial introduction was successful. The introduction was a slow process with a period in which Diego was in 1 part of the Zambo cage while Grety was in the other compartment of the cage. After that, they were introduced to each other in the same cage, spending a few hours together each day supervised by Douwe and volunteers to ensure that the introduction went well. They now spend longer periods of time unsupervised and seem to be settling in well together. Till we have built new enclosure to give them more space, we will leave them together during the day while being separated at night. 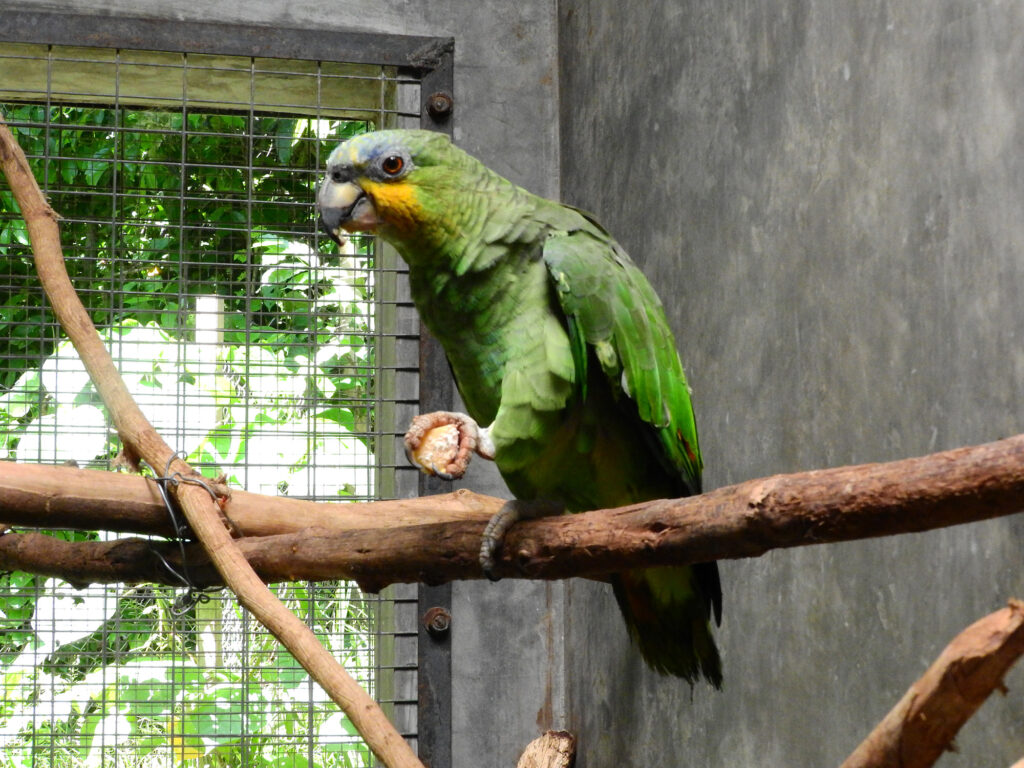 Delta in the clinic

Delta (orange winged amazon) was moved into Igor cage after her quarantine period in the clinic. There she met with Sayani, the orange winged amazon with only one functioning eye, and they seem to have found friendship as you will see them sitting next to each other most of the time.

The two ground doves, Hercules and Ewia, and Dido, the tanager, were also moved to Igor cage, Dido (tanager) and Hercules are doing fine. Ewia unfortunately was found with a broken wing and was taken back to the clinic with Hercules (for company). After her transition to the clinic and some good signs of recovery we moved Hercules back to Igor cage, leaving Ewia to recover in the clinic.

The clinic has been fairly quiet this month for the Esperanza Verde animals. Douwe and Emile (our long term veterinarian from Belgium) carried out an emergency operation on a dog from Bello. The dog, Pucca, had deceased puppies inside which were unable to pass. Unfortunately as all of the puppies were already dead the uterus was removed by Douwe and Emile so the dog would survive. The dog made a speedy recovery and was running around Bello within a few days.
One of the white winged parakeets was brought into the clinic with a problem to its cloaca. Its problem remains uncertain and it is being kept at the clinic until the cloaca is healed and fully functioning.

Manto, the scarlet macaw, remains in the clinic after arriving last month, he is a favourite with some volunteers and is a picky eater, preferring to eat just pepino fruit and tuna.

Ezra (female white fronted capuchin) has finished her quarantine period at the clinic, however has remained there to settle in. Daytona was brought up from Pepe cage where she stays to keep Ezra company and hopefully Daytona can convince Ezra to move and explore a bit more, as most of the time she is laying in her hammock. Their introduction went without problems and we are confident that Ezra will be joining the group of wild monkeys soon.

This month we have had one new arrival, a juvenile kinkajou called Chosko. He was weighed and given a health check as all new arrivals receive. He was estimated to be a year old when he arrived and is doing well in the clinic in his quarantine period.

Douwe and Geiler have been constructing an extension to the back of the kitchen. They are extending this space for volunteers and the highly awaited football table. This extension is likely to be finished within the new year.

While still work is being done at the quarantine, the Lulu cage has been completed this month, replacing the old Roko cage. Thank you Wild futures in Looe, UK, for making this happen.

The volunteer house has been full for most of November and December. There was a large group change with 10 volunteers including Alex (assistant manager) leaving and 5 arriving. This large change went well, with new volunteers learning their jobs quickly and settling in at the volunteer house. Both Sean and Lauren returned for short term visits spending Christmas at Esperanza Verde.
With a Dutch family running the place, Saint Nicolas was celebrated the Dutch way. It turned out to be the favourite event for many volunteers, with a lot of (self made) presents, Douwe going on a treasure hunt and Marlon receiving a beautifully decorated machete. As always there was a lot of dancing and partying, Dutch sweets and good food.

Christmas was celebrated at Douwe and Olivia’s house with all the volunteers. A total of 20 people for the festive dinner saw every table and chair being obtained from all over EV. The effort was worth the celebration. Once dinner had finished the tables were cleared to make way for cocktails and dancing!