December is always a month of celebrations. As we have a Dutch family running the place, we got to celebrate the birthday of San Nicolaas at the beginning of December. With poems and treasure hunts it resulted in a really fun night full of laughter, gifts, food and drinks.
On the 25th of December all the volunteers and all of the workers and their families were invited to the family’s house to celebrate Christmas, with a great dinner and some wine. Kayla put a lot of effort into the decorations, the menu and the cooking. It was a great evening.

Last month we released Loki, Martin, Monano and Moyo (male woolly monkeys). They all seem to be doing really well finding their way to the monkey tables and are spending a lot of time in the trees. For a monkey that had been raised in a household in Lima, Moyo, is doing amazingly well. So far he does not want any contact with us; neither does he try to get into our houses. Loki on the other hand is trying to get a lot of attention, especially from new volunteers, by touching them and trying to ‘play’. As we want him to be able to live freely around the center we need to teach him that he should leave us be and stick to his own species. When he is older, with his canines fully emerged, we will need to be able to walk around without him trying to dominate humans as the alpha woolly. This is one of the reasons why it is so important for our volunteers and other staff members to stick strictly to the no-touch policy. By following these rules the chances are greater that Loki will develop natural behaviour patterns and spend more time up in the trees with the other monkeys, which is safer for us and healthier for him.

It seems that Capuchin Alpha-male Macu is doing very well in passing his genes. With both Nikita and Lia giving birth recently. Nikita’s baby (large headed capuchin) was growing up beautifully, although often without her mother, as Rioma (another but younger and more dominant capuchin female) often takes possession of the young. The baby, was already moving about on its own. Unfortunately the day after Christmas we saw Nikita walking around with her dead baby in her arms. Capuchin females are known for doing this, carrying their dead baby around for a day or two. Nikita never comes close to us, so we have not been able to see what happened to the baby. She carried it around for a half a day more and then probably let it go somewhere in the forest.

Natasha, the baby bat which we took care of for several months, unfortunately died in an attack of what was most likely a rat. She was just recently moved to a bigger cage to start her fly-training. The rat was able pull her wing through the mesh and bite her. We are really sad that we lost her.
The yellow footed tortoises are all doing fine, and there has lately been a lot of mating activity in the reptile enclosure. The monkeys got their hands on an egg, which we quickly recoveted and have now safely in the clinic. Let’s see if it is still viable…it will take some time as tortoises are inherently slow.
Ringo, Rabito (male red brocket deer) and Doquino (male agouti) are all doing great. It is for many their favorite part of the resident tour, as they are always happy to see you coming. And of course there will always be a monkey around to steal some of their nice veggies.
Let’s not forget our two resident female and male peccaries, Kohana and Timo. Since they moved back into their old enclosure again there have not been any mishaps with monkeys, and they are enjoying a scratch once in a while from the volunteers. They love being scratched by a stick!

Last week two people from a nearby village came by to ask us if we could take care of Grety (margay, around 6 months old). They found her near their plantation and kept her as a pet for five months. She became too expensive (always needing chicken) so they decided to bring her to us. We showed them around Esperanza Verde and explained the importance of our work. Now Grety is in the SUST Animal Orphan Hospital where she is being taken good care of. She looks healthy, a bit skinny and she needs some brushing. She cannot be released in the future so she will be one of the residential animals at Esperanza Verde. That is why, next to feeding and caring, we also put a lot of effort in giving her a lot of enrichment.
Mokwai and Rumani, the crab-eating raccoons, are doing good. Some small problems with their eyes and paws means that they need to stay in the SUST Animal Orphan Hospital for a while but they now spend some time outside as well. During the day they are staying at the La Sapa cage where they seem to enjoy being outside exploring. They have also started eating little snails alongside their normal food and milk.
Rubai (young opossum) moved into another enclosure at the SUST Animal Orphan Hospital. Because he has Guiardia we cannot reunite him with the other opossums yet, but in the near future all opossums will move into the Arana cage. In the meanwhile, Rubai seems to enjoy his new enclosure very much. 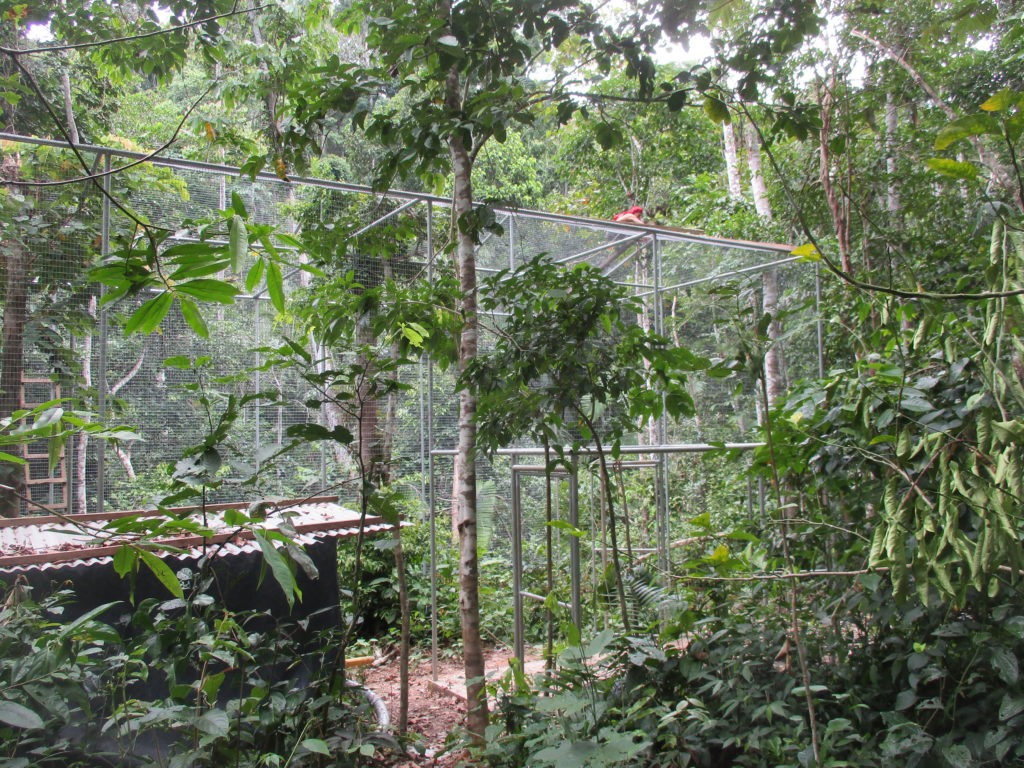 Construction is not only about building new enclosures, but also about maintenance of existing buildings. This month a lot of effort was put in replacing the mesh at the volunteers’ house and kitchen, painting the walls of the SUST Animal Orphan Hospital and making sure everything works as it should. Of course the work at the quarantine and Elmo-cage are gradually moving forwards too.

Last month we had some great enrichment projects again, such as a swing for the parakeets, all sorts of different food games for the parrots and hide and seek with food for the spider monkeys. We put a lot of effort in creating enrichment for the resident animals and the birds. The reason for this is that we want to make sure they get challenged enough and live a happy life. They enjoy this enrichment a lot and it is something we are continually focusing on.