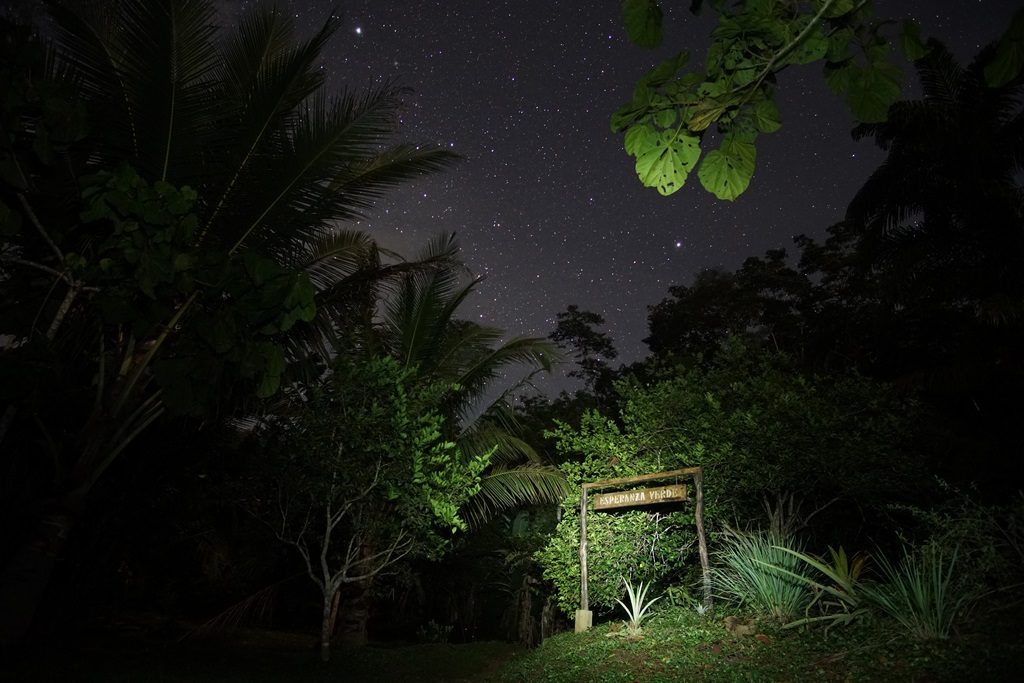 January started in a similar fashion to the way December ended, with all volunteers and the family gathering together to see in the new year. A bonfire at the volunteer house, burning effigies, fireworks across the river, great food and great company meant a fantastic time was had by all. Work life balance is so important, and celebrating the new year with new friends was the perfect way to equalize the scales.

Loki, Martin, Monano and Moyo (male woolly monkeys) released in November are now well and truly comfortable in their new outside surroundings. Loki true to his namesake, is the trickster. Constantly trying to grab attention from volunteers as well as the occasional pounce to see if the newest volunteers have their wits about them. Never a dull day at Esperanza Verde with so many characters to deal with. The other three males released are always present and interact well in the group of monkeys within the direct vicinity.

Khali (male large headed capuchin) who was a familiar face to any volunteer in the last twelve months, hasn’t been seen since the beginning of the year. It is believed he may have been pushed out of the group by one of the wild males, being either Macu, the alpha who has been with us for more than a year now, or the newer big male. We can only hope for the best. We just hope he did not get hurt and will be able to find another group to join. Esperanza Verde gives every animal onsite the best opportunity for a second chance, but there is no denying nature and the course it can take.

Parakeets. To secure the parakeets from outside interference (the monkeys!) Douwe mounted electrified wires around the top of the enclosure and at several points along the walls. When birds are illegally trafficked their feathers are cut and wings often damaged. This makes them increasingly vulnerable while they recover as the only method of gaining altitude is by climbing the sides of the enclosures, where they can be targeted by outside living animals. We hope these new measures will allow the parakeets to rehabilitate in peace. The majority of them are not able to fly yet, however six parakeets from this group have already been released back into the wild.

Yellow footed tortoises are all doing well with plans to move a portion of the group to give them all more room to roam. We currently have 28 in one enclosure and although not crowded, more space is always of benefit. 10 will be chosen (including Pepito, our most senior tortoise) to live in the Rincay enclosure.

Grety (female margay) is fast becoming one of the favorites of the resident animals. Although the “No Touch” policy applies to many of the animals at EV, it is encouraged to spend time with Grety and enrich her each day (hardly a chore). She can likely never be released, as she is already used to the experience of petting from being kept as a pet prior to arriving at EV. Currently Grety is only 2.3 kilograms, the size of a large domestic cat, but it may get interesting in the future as her species can grow to 9 kilograms.

January has proven to be a busy month in the clinic with two new capuchin monkeys, two peccaries, two parakeets and an agouti joining the ranks of animals getting a second chance at our rescue centre. Needless to say, the clinic volunteers have been on the top of their game and done themselves and the team proud!

Mokwai and Rumani (crab-eating raccoons), were moved out and are now permanent residents in the La Sapa cage. Their feet and eyes have healed nicely. Feeding is still being supplemented with milk but they are eating lots of snails, small fish and solids too.

Rubai (male opossum) moved in his smaller enclosure to an outside cage. He was joined this month by Cia and Aeris (female opossums) in a separate cage within the larger enclosure. These two opossums were under Kayla’s care at the family house. After some weeks sniffing each other out through the mesh, Rubai, Cia and Aeris were weighed and were introduced to one another in the clinic under watchful eyes. Once we were satisfied that they had become friends, they were let out together to roam in the bigger enclosure, but with the option to go back in to the safety of their own small cages and sleeping boxes. They got along well rather quickly, especially as they are solitary creatures in the wild. However as they are still young we hope they can stick together for a bit longer so we can slowly get them ready for a possible release.

Community outreach. Being fortunate enough to have both a veterinarian and a veterinary nurse in the volunteer group at one time was an opportunity not to be missed and so a day was spent in Bello Horizonte Spaying and Neutering dogs.

Nayro (baby male capuchin monkey). Nayro was approximately ten weeks old and was only 580 grams when one of our volunteers convinced a local that Esperanza Verde was the way to go to give him the best chance of a natural life. He adapted very quickly and with his already independent character, he is living during the day in a small cage in the clinic. He only needs some minor attention from us, while he is being visited frequently by three capuchin females on the outside, Mica, Kres and Mayantu.

Burbujas (young male capuchin monkey). It is heartwarming when you see the effort people make when it comes to doing the right thing for an animal, with one person driving over 14 hours from another region in Peru with Burbujas to meet Olivia in Pucallpa. He is approximately ten months old and after his quarantine period, he will stay for some time in an outside cage, so he can have safe contact with the outside monkeys before joining them.
Esperanza Verde volunteers often stand out when visiting Curimana (the nearest city with internet), and this was the case when one was offered Dakiri (a young female agouti). A short visit from Douwe was all it took to uplift and bring this energetic ball of nerves back to the clinic for her quarantine period. Later we hope she will join Ringo, Rabito (male red brocket deer) and Doquino (male agouti). In the meantime, she is being looked after in the clinic and so long as nobody moves too quickly she is settling in nicely.

Roxanna and Xiomara (female collared peccary) both arrived within a week of each other under varying circumstances. Roxanna is four months old weighing 3.6 kg and was found alone in a neighboring plantation. She was kept as a pet briefly before she was delivered to EV one Saturday morning. Meanwhile Xiomara is seven months old and nearing 14 kg. Xiomara had been acquired by a family in Curimana whilst she still had an umbilical cord attached. After many months of being hand fed and being part of the home consisting of parents, two children and at least three dogs, she was brought to Esperanza Verde. There was obvious love shared amongst this family unit, and it took a huge amount of strength to make the right decision for Xiomara and bring her to us. While in quarantine Xiomara is getting a lot of extra attention from the volunteers and will no doubt flourish when released along with Roxanna into an outside enclosure.

Inuk and Zasu (dusky headed parakeet) both came from neighboring Bello Horizonte. Zasu was found in a nest after a tree had been cut down and is showing great progress as the photos illustrate. Zasu has gone from a semi naked bird of 60 grams to a strapping almost fully feathered bird of over 110 grams in less than a month. Although still being hand reared his meals are being drawn out giving him a nudge in the right direction to start feeding himself. Inuk being a fledgling was found on the ground and unfortunately only came to us after people already had cut his feathers. He is eating well and although jealous of his cage mate being hand fed, he will no doubt join the other parakeets in Tupak in the coming weeks.

January is officially part of the rainy season, and although the last two weeks showed shades of what is normally expected, a particularly dry start to the month meant that the water tanks had to be topped up by pumping water from the river. This is a great reminder of just another thing we all take for granted! The dry weather has allowed good progress to be made on current construction projects as well as maintenance and upgrades across the centre. Over 300 sand bags have been collected, filled and carried to the construction site. As the vital component in cement, this was a task that was approached with surprising enthusiasm and was made so much easier by the earth being dry underfoot. No time has been wasted in putting it to good use with layer upon layer of new brick going in to the new quarantine at every available opportunity. The busy month in the clinic also highlighted the necessity of this seperate quarantine facility and what an asset this new building will be when it is up and running!
Continuing efforts are being made to place new mesh on the windows, especially with the dreaded mosquitoes swelling their ranks in anticipation of the upcoming (or is that current) rainy season.