November was a relatively quiet month at Esperanza Verde with a lot of new volunteers arriving at the beginning of this month. No new animals came in so we could focus on our resident animals and transitioning our most recent group of animals out of quarantine.

Unfortunately this month we had to say goodbye to one of our dear animals, Tawaki, one of the younger male woolly monkeys.

At the end of last month Tommi (young male squirrel monkey), Aritha, Inka, Benito and Tagu (2 female and 2 male tamarins) were released into semi-captivity. To begin with they slowly explored the area, slept in their release cage at night and slowly began to interact with the wild Saddleback Tamarin group. The majority of them seem to have joined the wild group with the exception of Aritha (older female). In the matriarchal Tamarin groups it is often females that find it harder to integrate. Fortunately the wild group didn’t attack her, however she is far more interested in humans than other Tamarins. This behaviour isn’t uncommon in primates that have spent long periods of time as pets. Our no-touch policy seems to be working though and Aritha has started to spend more time in the trees with the Woolly monkeys.

Luna and Otis (female and male night monkeys) were ready to live outside and so we started opening the door of their cage at night. At first they found their new release cage, which is specifically designed for Night Monkeys, quite scary. However, after a few days they wanted to go out as early as five in the afternoon. They are exploring outside at night and return to sleep in their cage in the morning.

At the beginning of this month Tawaki (juvenile male woolly monkey) was grabbed by one of our peccaries whilst stealing food from their enclosure. Despite two rounds of surgery to try and save him, he died during the night. This was a blow to everyone at Esperanza Verde and Tawaki will be deeply missed.

After this the peccaries were moved into their old enclosure again as we didn’t have any incidents in this enclosure. We have adjusted our feeding routine, volunteer training and procedures to try and ensure this doesn’t happen again. In all these years of rehabilitation we have never had this experience between these two species. There were many influences that might have caused it to happen, e.g. the large woolly males disappearance (Willow and Kamari), the death of Quintisha (oldest female peccary) or the change of enclosure. We just hope that, with all the adjustments we now have made, it will never happen again.

Never a dull moment when capuchin monkeys are around. Notorious duo Kres and Khali smashed the window of our Almacen (food storage) with a stone. Our volunteers caught them testing all types of food. Although we were not happy with them sneaking in to the Almacen, it shows once again how intelligent capuchin monkeys are.

Martin (young woolly monkey) from the clinic joined Moyo and Loki (male woolly monkeys), after which they all were released from the La Sapa enclosure. This was very recently, and for the first day all went well. Loki enjoyed being outside again, jumping around and re-establishing his position amongst the outside females and youngsters. Moyo and Martin took some time in coming out, but then enjoyed being in the trees getting in touch with the others and stayed close to the La Sapa enclosure the whole day.

After some good care at the family’s house for a couple of days the crab-eating raccoons Rumani and Mokwai are back in the clinic. They get milk four times a day and are slowly starting to eat some solid food as well.
Natasha, (young Pallas’s mastiff bat) that was found by Kayla near her school, is still doing great. She finally learned to drink her milk from a lid instead of a pipet and she is very popular amongst our volunteers. When Natasha first arrived, she weighed only three grams. Now she’s grown to an impressive eight grams. Next step is to get her to eat some flies.
Martin, a young Woolly monkey, was moved out to stay with the big boys in La Sapa the male woolly monkeys Loki, Monano and Moyo. Loki immediately took care of him and the others also seem to have accepted him straight away. Martin still needs milk twice a day and with Loki protecting him, it’s a very challenging job for the volunteers giving it to him.
Monano and Tushko were admitted shortly to the clinic for feces sampling and deworming treatment, after which both were both immediately released.

The group of yellow footed tortoises that came in a few months ago, passed their quarantine period and joined the others in the reptile enclosure. Before releasing them, we had to make sure they are able to get out of the pond in the enclosure when necessary. Our volunteers let all tortoises do a swimming exam by letting them walk out the edge of the pond three times. Fortunately all of them passed.

One of the tortoises, Optimus, misses a front leg and lost some weight. We kept him for observation in the garden at the clinic, and after a week he had already gained weight. He moves well enough, so we hope we can shortly move him in with the others in the reptile enclosure.

Alyak (the yellow spotted river turtle), was doing well and was moved together with two others, which were passing their quarantine in the MOMO-enclosures, to the new quarantine for reptiles (named Aguatena and financing was possible thanks to Herpetol Switzerland) next to the new (under construction) quarantine.

The number of animals at Esperanza Verde is always increasing and that means that more animals are being fed. In order to make it easier to prepare food, the bodega is being improved bit by bit. Douwe started with making new shelves for herbs and vegetables.

Recently the water level rose so much that all the bricks could easily be moved from the other side (our work shed in Bello Horizonte) to our side. Additionally we could move a lot of sand for the concrete floor of the quarantine (Jaap van de Graaf donation), as we could get very close by canoe to the site. We always try to profit from these situations, as the other option would be to carry all by hand. The rolls of mesh for the Elmo enclosure (Lush funded) have also been brought to the site.
Work is being done at both constructions simultaneously. When it rains, we mostly work at the quarantine (as there is a roof) and when it doesn’t at the Elmo-enclosure. Again it shows how dependent we are here on the climate. 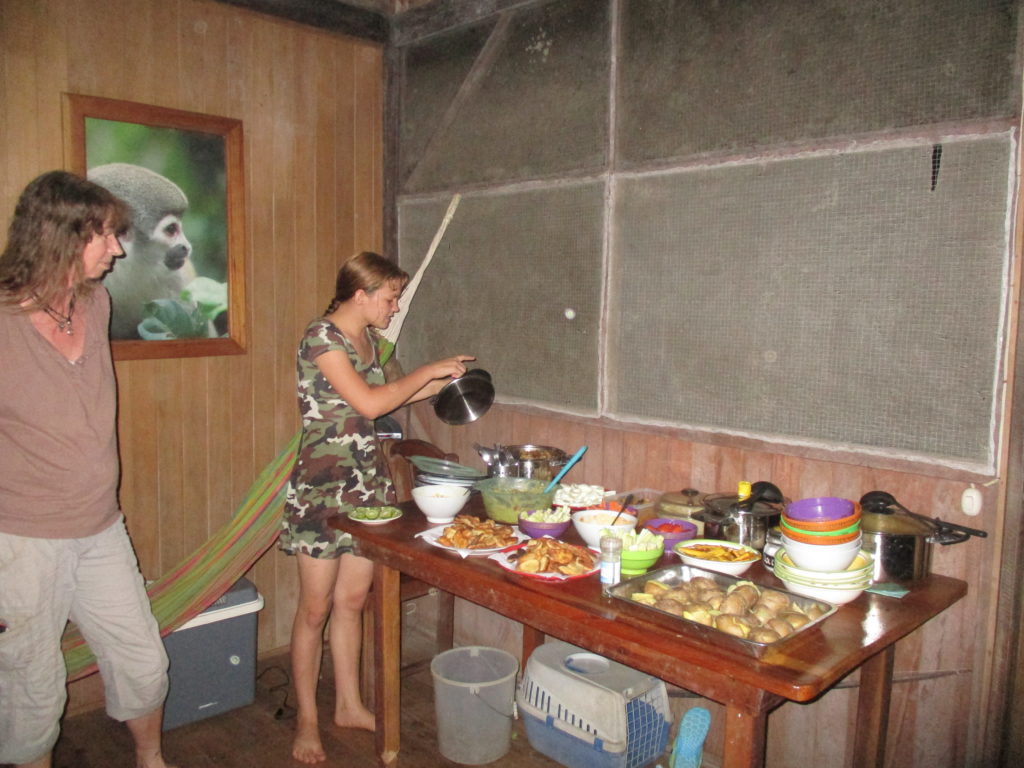 Kayla presenting the buffet she made

At the beginning of the month, all volunteers were invited at the family’s house where they enjoyed a delicious meal Kayla prepared.
Since last week, volunteer Niels is teaching English to the children at the secondary school in Bello Horizonte. Niels is a professional English teacher and will work at the school twice a week. We are happy to also help out in the local community.