Rainy season has begun! This month brought us a lot of rain and the river rose quickly. Drains were cleaned out by the volunteers to make sure all the water could drain away. There has been a lot of volunteer changeover with some of our long term volunteers leaving, but there are always new faces to take their place! The clinic had been quite empty for a while but has been getting busier over the last few days. The building of the quarantine made a lot of progress and the new turtle enclosure in front of it as well. The new volunteer group visited the big Regalia waterfall where they had a blast and Martin (a young male Woolly monkey) arrived in the clinic. Last but not least: after a five week stay in the Netherlands and the celebration of Marlon’s ninth birthday, Olivia and Marlon are home again. 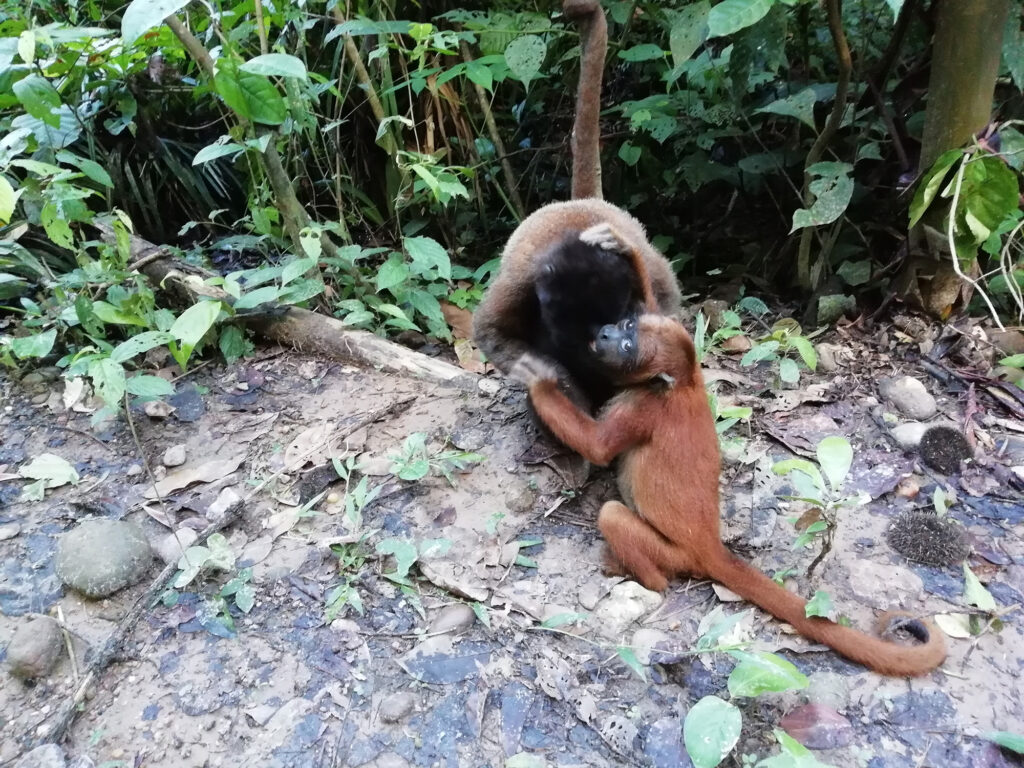 Ramon (young Howler monkey) is getting more independent every day and explores the area of Esperanza Verde on his own nowadays. From this week on, the Ramon person won’t babysit him constantly anymore but will help out with other jobs with monkey checks throughout the day. This also means he can sneak off to the monkey tables every now and then to steal some juicy fruit. Ramon loves to join us on the leaf walks so he can grab some of his own leaves.

Suly and Tushko (youngest woolly monkeys) were both doing great outside. They played together while becoming friends with the other monkeys. However, after some weeks, Suly missed a couple rounds of milk and was found on the ground a day later by a volunteer. She was in a poor state and had a high fever. She spent the night at the ‘intensive care’ at the family’s house, but died during the night. Necropsy did not give any clarity on why she died so suddenly. The volunteers had a hard time on Sully passing away and she will be deeply missed with her beautiful big black eyes and her rare red fur.

Katinka (female young spider monkey) left her cage last month and is doing great outside! On her first days she was already going on adventures on her own ignoring all the other monkeys.

After two weeks she started making friends with the baby woollies, Ramon (howler monkey), Cumala and Camu (spidermonkeys mother and son) who got re-released successfully last month too. Katinka sleeps in the Pepe cage together with Darwin (male howler monkey) and Tushko, the young woolly. The first couple of nights, they didn’t manage to sleep in the same box, however, after a few nights they became friends and started sleeping together in one box. At night, Katinka, Tushko and Darwin cuddle up with the three of them in one box. Which is adorable to watch.

More good news, this month we had the honour to welcome a new-born Capuchin monkey into the family. Nikita (female Capuchin outside) had a little one which means we can brainstorm on a new name again. 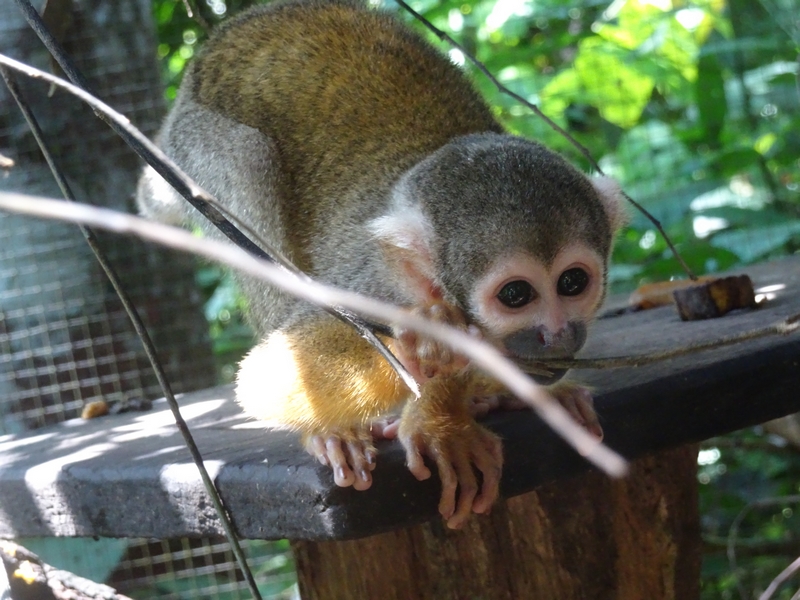 Tommi (Black capped squirrel monkey) and the Andean saddleback tamarins, Tagu, Benito (males), Aritha and Inka (females) were moved from the clinic to the Arana cage earlier this month and seemed to like their bigger enclosure a lot. In the last week of October, we released them. While Tommi already likes to wander around on his own the tamarins take some more time to get used to their free life and sometimes come back to sleep in their cage at night.

Ruena (tayra) couldn’t be happier because this month she turned into an official tour! This means that volunteers are taking her on a long walks twice a day so she can get used to life outside the cage. She really seems to enjoy it and is getting so independent that she sometimes finishes her walks by herself. Leading our volunteers on a search through the jungle to find her again. We have also provided her with some new environmental enrichment like a rattle with a bottle, stones on a rope and perfume that is sprayed on certain places in her cage. Tayra’s are known for scent marking their territory so this enrichment really fitted her. 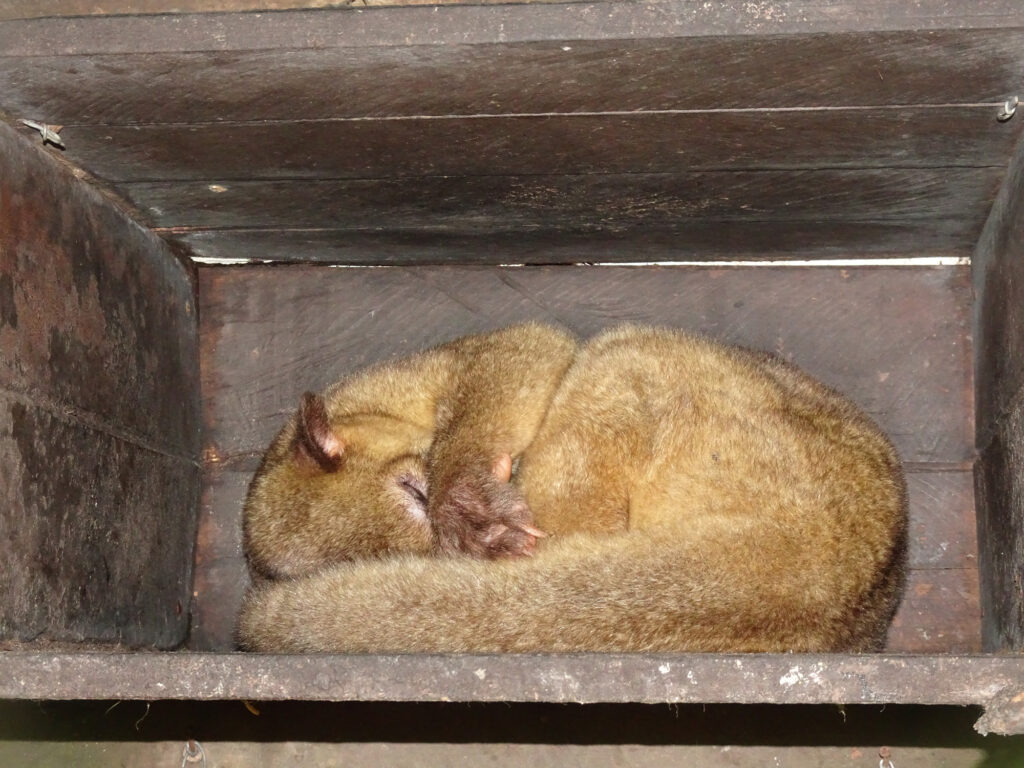 Last week Kiko (male kinkajou) was spotted again! Our kinkajous have an open cage so they can decide by themselves whether they go out or stay in their cage. Kiko was nowhere to be seen for some time but now we know he’s fine.

Unfortunately, we have to end our ‘other mammals-section’ with some sad news. Roknar (young male Red brocket dear) who was living with the family passed away. Thinking he was getting better, this was some hard news to accept.

Rafiki (Blue-and-yellow-macaw) is still in the clinic, where he was treated for an infected wound. He is no longer receiving medicine and is improving a lot, slowly gaining more strength and weight.
After a long visit of two white-winged parakeets in the clinic, our ‘concern-cage’ was suddenly empty at the end of this month. For one bird it turned out better than for the other. One was doing so well it moved to Tupak-cage to join the other parakeets. The other one (white whinged parakeet) had a fracture at the top of one leg. Despite our best efforts the parakeet did not survive it.
The empty ‘concern-cage’ did not stay empty for long.

Our litter of new opossums have been receiving a lot of care and attention. Unfortunately, being so young, some fell ill and although antibiotics were administered, the treatment was not in time enough to save them all. Two survived, and they are now finally gaining weight as well as strength, living in a small enclosure where they have room to climb and explore.

Natasha (young Pallas’s mastiff bat) has grown more than twice her original size already. She is getting some hairs on her back and she is drinking a lot of milk. She is spreading her wings more often, washes herself a lot and even ate some little insects. Such an achievement!

This month Kayla brought us some new treasures from the Village of Bello Horizonte.

Let’s start with Dorian (a dusky headed parakeet). This parakeet was the pet of someone in Kayla’s class; the parakeet was biting everyone, so they wanted to get rid of him. Dorian was named by a volunteer and he is currently housed in the clinic.

Second, we have Martin (young male woolly monkey, estimated 9/10 months). He was spotted in a garden a couple of times by volunteers who went to Curimana. Kayla managed to get in contact with the owners and convinced them to bring him over. He is a bit nervous and not really used to people and we’d like to keep it that way. After a few of weeks in quarantine he will go to an outside enclosure before he will be released to the outside group. Lastly, we have another opossum, which is a family member of the other two we have, but twice the size (as ours had some problems). The person who gave us the opossums kept one herself and it was roaming freely at her house. Her family did not want the ‘pet’ anymore so she gave the opossums to Esperanza Verde too. It now lives in a big cage in the clinic.

Just in time to make it for this update, two young male crab-eating racoons arrived, now named Mokwai and Rumani. Their mother was killed by a dog, and the litter of 5 pups was taken by the dog’s owner. As she has cows she provided them with fresh cow milk, which they drank well, but their body was not used to this kind of milk, so 3 died. She then decided to leave them with our cook in Bello Horizonte, so she could bring them to us. They are for now under intensive care at the manager house. They are not out of the woods yet, as they still are coping with bad diarrhoea and a lot of fleas. The fleas have been taking care of, and they are under treatment for the diarrhoea. They drink milk eagerly, but will have to adjust to the milk replacer and food we can provide for them. This is often a difficult transition for young babies, as their own mothers milk would of course be the best.

Most of our volunteer group visited the big Regalia waterfall. Because of the heavy rain fall the night before the river was very high and the waterfall very strong. It was a beautiful experience and a lovely day. Of course a group picture was taken at the big tree.

This month, a lot of volunteers helped with the construction of the quarantine and the new addition, a quarantine enclosure especially for turtles/tortoises. This is particularly important as their slower metabolism means their quarantine period is longer. Lots of great progress is being made!

Kayla and her classmates are busy joining a competition powered by Samsung from which the winning team will obtain a ‘digital’-room in their school with laptops, tablets and a whiteboard. Kayla and her team worked out the idea of a garbage-free village and made a movie about it. They already got to semi-finals and now we are awaiting the outcome for the finals. The last five schools will be invited to explain and present their project to a jury in Lima. We will keep you posted. You can find a video in which Kayla is presenting their project, on Youtube : https://www.youtube.com/watch?v=Sq0dwR7rz5g