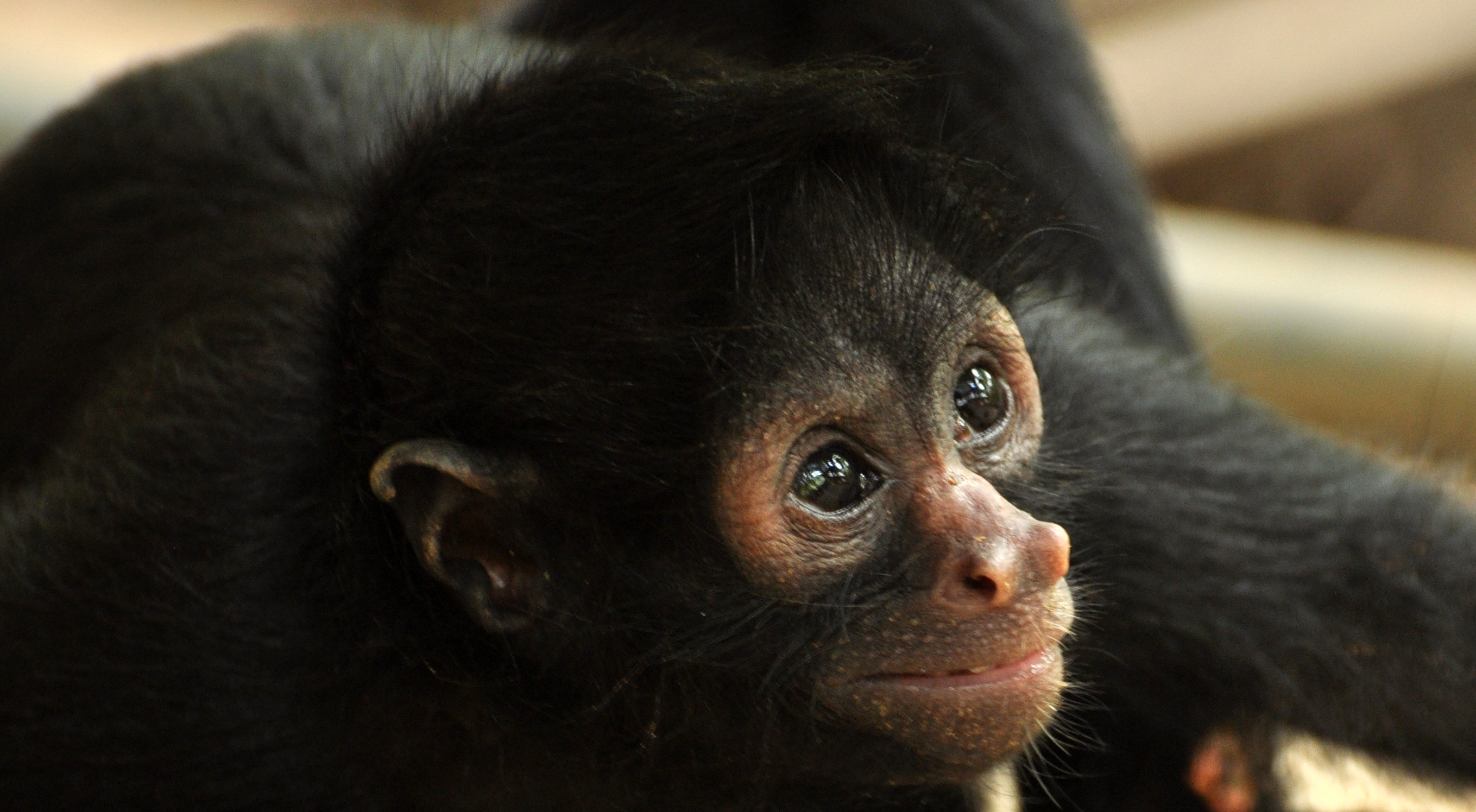 February is traditionally the height of the rainy season. There have been impressive downpours, where views were obstructed and paths became nothing more than shallow rivers running throughout the project, but there were many fine days in between to lift the spirits and fortify the soul before the inevitable next rainfall.

Darwin and Ramon (male red howler monkeys) are feeling the tough love at the moment. Howler monkeys have a low survival rate when separated from their parents at an early age, and so Darwin and Ramon were given extra attention by volunteers. When they first arrived the “no touch” policy was relaxed to allow extra care and to ensure the correct diet is observed. As Darwin and Ramon are now getting bigger it has been a gradual process of weaning them off the extra attention and now the “no touch” policy is being enforced. It is amusing to see their disgust at being ignored, but it is necessary to ensure their health and both theirs and volunteers’ safety, as they get bigger. 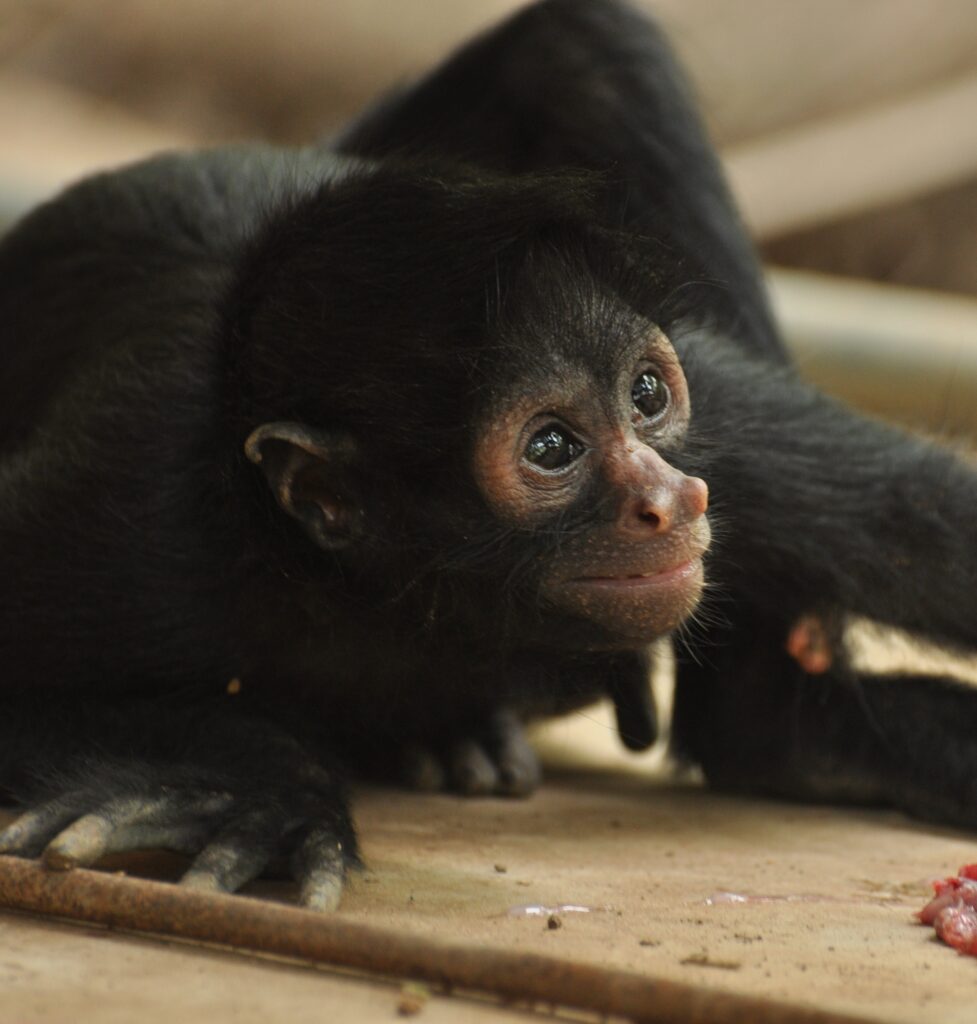 Camu, the young male spider monkey, and son of Cumala, has disappeared. He was a real character who was always pushing the boundaries and trying to get attention. At a little over 18 months it is normal behaviour for spider monkey young to become more independent and so it was not seen as weird for Camu to be away from his mother, Cumala, for long periods during the day. But one night he did not sleep with his mother, which was strange, and the next day he was absent from the monkey group. Extensive searching turned up no sign of Camu. At his age he should have been back with his mother at the end of the day. Being located in the jungle is a huge advantage. At Esperanza Verde many animals, especially the monkeys, learn to climb in the trees and encounter other members of their species for the first time, they have the freedom to form a group, and learn to forage for themselves. Unfortunately it also comes with certain risks, as it we can’t control all that happens in the forest.

The “Rincay” enclosure is now populated by ten of E.V’s largest yellow footed tortoises, who were recently moved from the reptile enclosure. It was also the perfect time for a health check, with all tortoises being weighed and given deparisitation. Interestingly Pepito is the largest tortoise onsite, but Martha tipped the scales and came in 210 grams heavier than him at 9780 grams. Pepito was happy to be back in his old enclosure again. Many will remember that he spent several years in this enclosure with his best friend Rincay the tapir, who sadly passed away in 2017.

Grety (female margay) benefitted from a relaxed “no touch” policy when she first arrived at EV. Given the unlikeliness of release, volunteers were encouraged to interact with her on a daily basis to provide enrichment. This interaction is still encouraged, but there is now a no direct contact policy in place. Grety’s feisty nature is shining through and injury prevention/volunteer safety is always our prime concern. Daily enrichment for Grety is very important to keep her active and lively, and is vital until we are able to finance and build a larger enclosure. 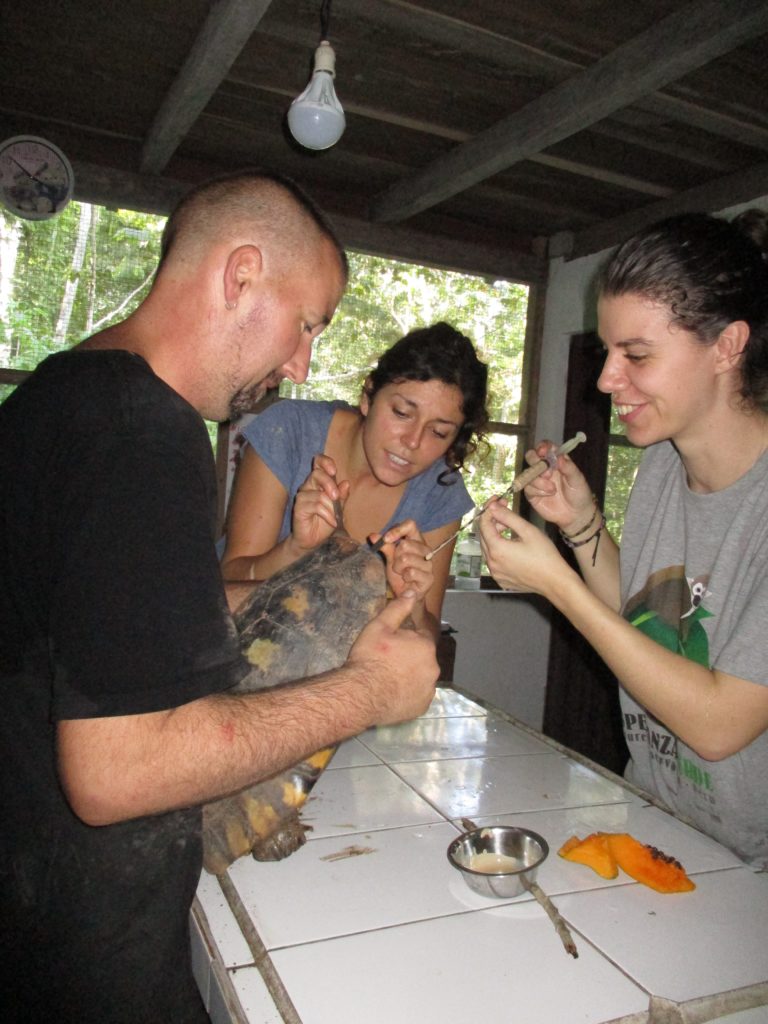 Thankfully February was not as frantic as the beginning of the year, with only one new arrival. Although new arrivals were lacking, a lot of ongoing health issues were addressed, be it deparisitation, botfly removal, ongoing veterinary care, as well as emergency operations.

Rafiki (Blue-and-yellow macaw) unfortunately took another fall this month and was experiencing limited movement is his limbs. He is now under intensive care at our veterinary clinic and is receiving physiotherapy for his legs. His disposition is improving daily.

Rubai (male opossum) and Cia (female opossum) are gaining weight. They are doing well in their outside enclosure and now share the space without any separations. Aeris (female opossum) had to be separated as she had the tip of her tail bitten off, whilst in a small cage with Cia. Aeris recovery went well and she has now been reintroduced to both Cia and Rubai in the larger enclosure. Soon they will outgrow this enclosure and will be moved to a larger and more remote enclosure, where we hope to be able to release them back into the wild.

Nayro (baby male capuchin monkey) is progressing well having already moved from his small cage into a larger enclosure in the clinic. Although still getting extra attention due to his age and size, Nayro’s independence is still shining through and is expected to join Burbujas in the outside enclosure “Arana” later this month. 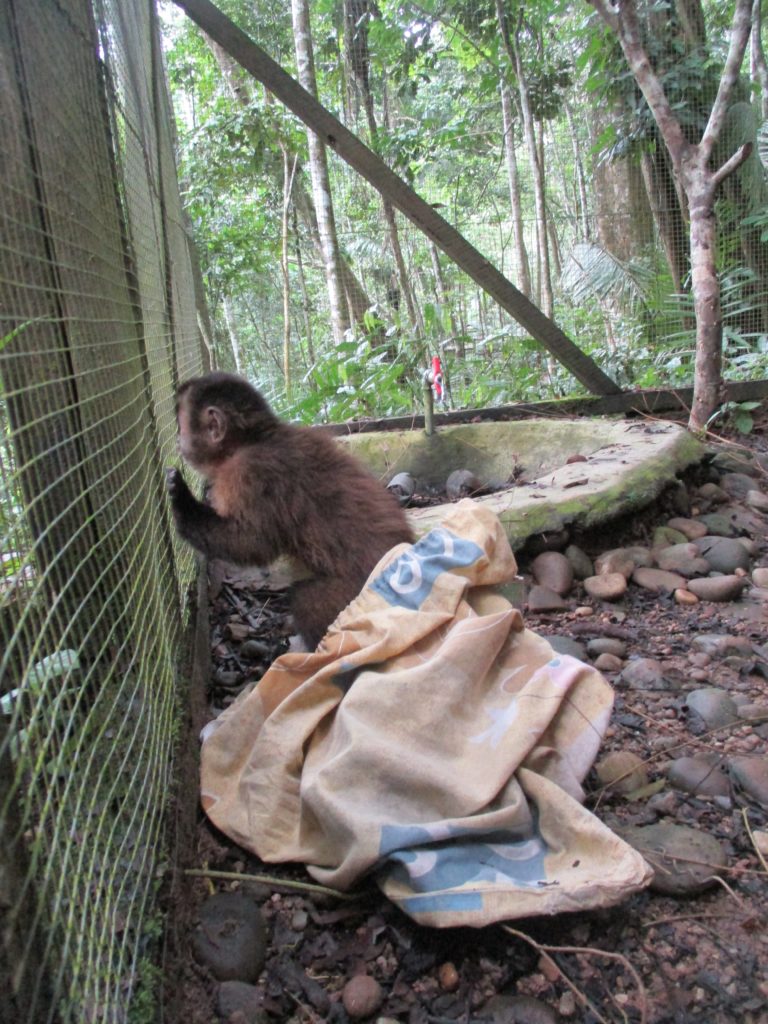 Burbujas in outside cage

Burbujas (young male monkey) has begun his rehabilitation moving him one step closer to the great outdoors. He recently was moved to the “Arana” enclosure, giving him the ability to mix with the other monkeys from within the security of an enclosure. As with Nayro, he is getting a great deal of attention from the capuchin females, Mica, Kres and Mayantu.

Dakiri (young female agouti) is currently still a clinic resident but there are plans to move her in the next few weeks. The plan is to introduce her slowly to Doquino, our male agouti, so she can later join him and the deer, Rabito and Ringo. When introducing any animal into a mixed environment it is essential to get the timing right. We cannot rush the rehabilitation process and try to plan for every eventuality.

Xiomara (female collared peccary) was recently released into the Xena enclosure with Timo (male adult peccary) and Kohana (female adult peccary). Every effort was made to ensure this introduction went well and the three pecarries had been separated by mesh for some time to familiarise with one another. Once Xiomara was released into the main enclosure the introduction appeared to be going well but after 4 days she was sadly fatally attacked by one of the others. Xiomara had been a favourite of many and we were all very sad to loose her. Her death is a stark reminder that despite our best preparations, animal behavior is unpredictable and we can never be sure that an introduction will be successful.

Inuk and Zasu (dusky headed parakeet) were released into the Tupak enclosure this month. For the first few days it was necessary to check in on the birds and to show Zasu where to eat. At times we made Zasu a separate bowl of food to ensure he was well fed whilst adapting to the new enclosure. Both birds have now adapted to the new living arrangements well. Although checks are still taking place, our direct intervention is no longer required.

At thirteen months old, Jope (male agouti) was brought to our rescue centre as his owner felt he could no longer care for him. After a quarantine period and thorough deparisitation, we will have to decide where he will be kept. We hope he can be placed in the same enclosure as the other agoutis and deer, however many factors will influence this decision. The sex, age and the individuals behavior must all the considered. 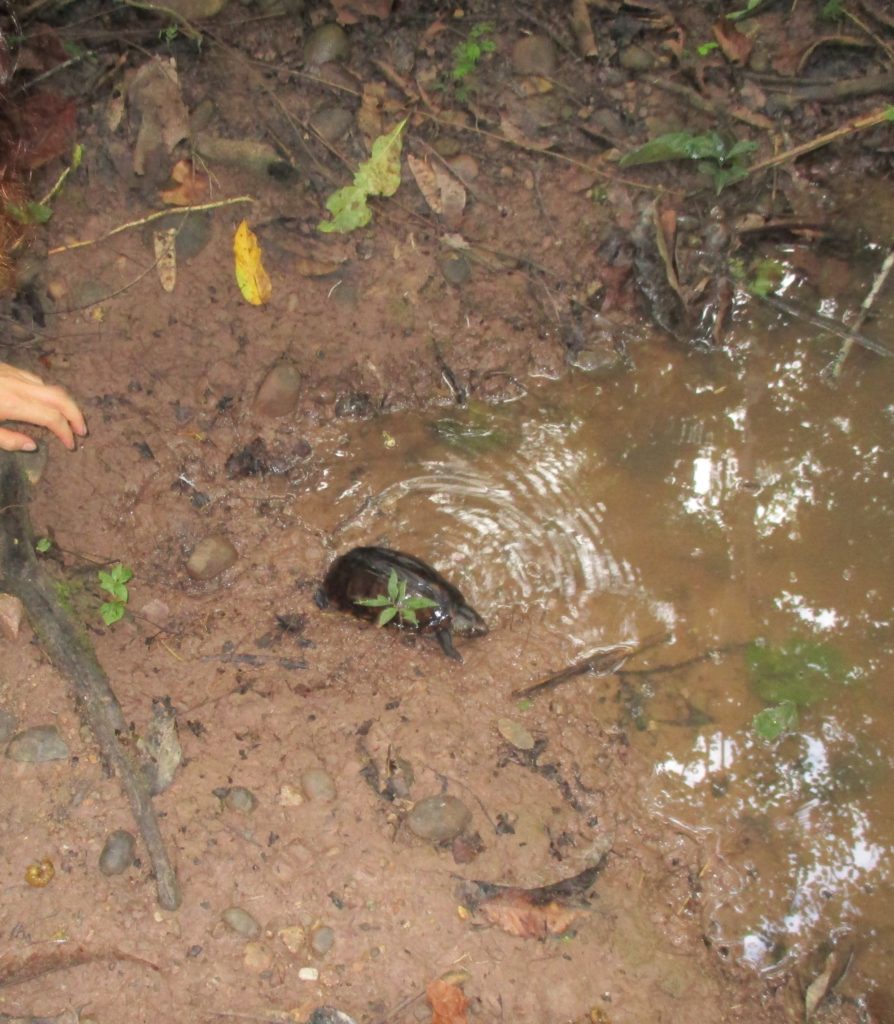 Our permanent staff member, Geiler, found a small Amazon mud turtle, while working at his plantation. For fear of it being found by other people and being eaten, he brought it to us. After a short medical check, we released it on the land owned by Esperanza Verde, giving it a better change of survival. 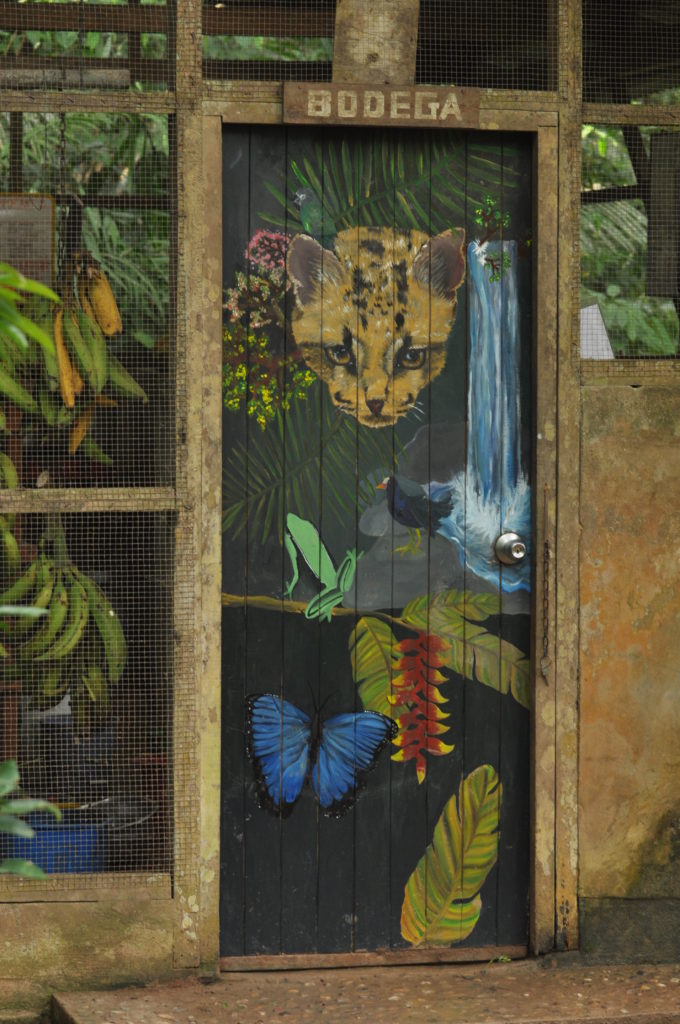 February has been a fabulous month for construction.

The Elmo enclosure has been completed, and at over 90m2 it is one of the largest enclosures onsite. This amazing feat would not have been possible without LUSH Cosmetics, who generously funded this new facility.

At 60m2 the new dedicated quarantine building is a major undertaking. This project was only possible by the generous donation of the Dutch foundation “Jaap van de Graaf”. This project has progressed in leaps and bounds this month. The walls are gaining height each day as row upon row of bricks are laid and the new drainage on the outside of the building was also completed. Every opportunity is being taken to utilise any spare volunteers or workers and this is paying off.

Modifications were made to the water supply this month with Douwe improving on what was already an impressive achievement. Cement lids were made and carried up to the collection point to stop the build up of mud that collects and blocks the water intake when there are substantial heavy rains.

February has been a big month for planting, with over 500 native hardwood trees being planted around the extremities of Esperanza Verde. Anybody who has had the pleasure of doing this will appreciate the amount of work and effort that goes into reforestation of this beautiful paradise.