February has been a fun and interesting month at EV; we’ve had new animals arrive, some have been released, some escaped (but came back) and the volunteers enjoyed a well-earned carnival party !

The female and male night monkeys Moira and Maru seem to be doing really well outside. They have a hatch in their enclosure (Tiliku) so they can come and go whenever they want, an opportunity they happily take. Sometimes they are in there for the food and a nice log to sleep in, but more recently they seem to have found a better place in the trees to spend the day in.

Alaya, the young female howler monkey was let out, after some bonding time with the male howler monkeys Armando, Ramon and Darwin in the Araña enclosure. It was a nervous time as she was still very timid and wary of humans but she was showing a lot of interest in the other monkeys outside. When we opened the enclosure she stayed in there for quite a few hours, before she started to explore and left Araña, sitting on the roof in the sun with some of the other monkeys. She spent the day out, and the other monkeys responded very well to her, being gentle and grooming her, it was a beautiful moment for everyone. Although Katinka, our young spider monkey did decide to tease her a bit by pulling her tail. She also went exploring up in the trees with the other howler monkeys. She is growing in confidence and enjoys being up in the trees. At the end of each day she returns to the enclosure with the other howlers.

We sadly also have some unfortunate monkey news this month. Samara (female woolly monkey) had her first baby, a female. It came a bit as a surprise, as we had already decided she was not pregnant! In the first days we saw the two together and everything seemed to be going well. On the 5th day the baby dropped from Samara and she didn’t come back to pick it up. We took both up to the clinic, tried to feed the baby and warm her, as she was very weak and dehydrated. After that we put both together in the clinic to give Samara another go at taking care of the baby. Unfortunately Samara was not being very attentive, so after careful consideration we decided to separate the baby from her mother again. We tried everything to keep her warm and hydrated, but she was too weak and died that same evening. It was very sad, but it also was a reminder of the importance of not having these animals as pets. Samara never had the experience of being raised by her own mum, neither did she see other monkeys taking care of an infant. We can only hope that she will learn and maybe copy some of the behaviour of our other monkey species such as Cumala, our adult spider monkey with her baby, and will be better prepared for it next time.

Ruiz, our green winged macaw from the aviary Pichu, joined Rimona, the new green winged macaw in the clinic. Maybe it was not exactly love at first sight, but neither were they aggressive to one other. They kept their distance in the beginning but after a week were seen grooming each other. Let’s hope Ruiz does not start to pick Rimonas feathers as much as he sometimes does with his own. They were moved together to the front cage of the Elmo enclosure, to meet all the blue and yellow macaws. If this goes well, both of them will be moved into the main enclosure soon.

Ermina (scarlet macaw) was living in the front cage of Elmo because she was previously bullied by Ruiz and Mebi. As this bully-couple has been separated now, Ermina was able to go into Pichu. It seems it has been a good decision for all scarlet macaws, they seem to be far more relaxed. Even Mebi doesn’t seem to be too put out by the absence of his friend Ruiz.

Rafiki our blue and yellow macaw, has had a long recovery, thanks to the bullying of Ruiz and Mebi. It was decided that he should be moved to the clinic again. He will never be able to be in a big aviary as the damage that has been done has left him without sufficient ability to climb or catch his own fall. He always seemed most happy with people around, even in a small cage, so in the clinic, we can keep him company and give him the best life possible.

As if we never have enough to do… recent rainfall has caused some damage. The peccary enclosure developed a hole at the rear. Of course the peccaries spotted it before we did ! You can imagine the surprise Karole (our returning Dutch volunteer) had on one of her loved leaf walks ! Luckily for us, they didn’t enjoy being out, and most of them returned by themselves and the rest followed us back again. By the afternoon the fence was repaired and all 6 had been safely returned to Xena in time for their afternoon feeding.

Last month we wrote about the parakeets from Tupak cage, which we had separated into different groups according to health and flight strength. The group of birds without any problems were moved to a cage ready for release. This month we opened the hatch of Aquatena cage to release these parakeets. After about 10 minutes of looking around they started going through the hatch and flew away.
At the moment, only 2 parakeets remain for further observation. The last 20 non-flyers are now in the Aguatena till they grow all their feathers back and can be released as well.

Kira (young female Ma’s night monkey) is doing well and has moved from the cage in the attic of the family house to one of the cages in the clinic. All the volunteers have quickly fallen in love with her and are taking turns in going to her cage before and after diner to feed her and stimulate some activity with her. Kira seems to love the attention; she is always very energetic and playful when a volunteer arrives.

It has been a busy month with new arrivals at EV. We received 3 amazons and a tortoise from the Ministry. The amazons were probably recently caught; they are wild and not used to humans at all. Unfortunately their wing feathers are cut, so they are currently living in the clinic waiting for their flight feathers to grow back. The tortoise, named Angelito (yellow footed tortoise), is spending his quarantine period in the clinic. We later received a tortoise from a man in Curimana, which we named Diablito. Since the clinic is quite full already, he is currently staying in a cage under the family house. 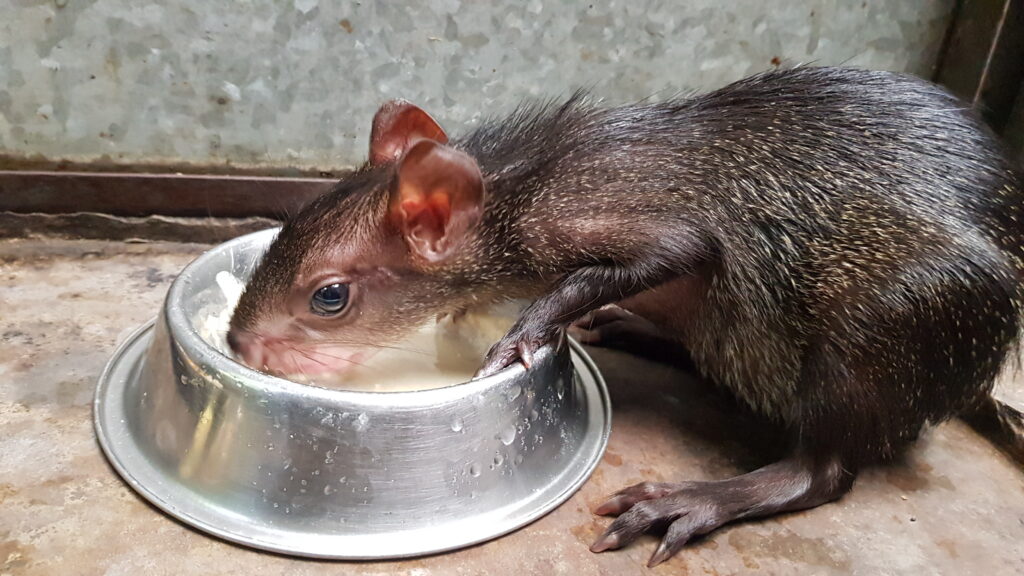 A baby agouti, named Mojita, was found on a plantation and was brought to E.V. She is still young but is doing well in the clinic. She is eating and drinking well, gaining weight and is very active and lively.

Flora, an orange winged Amazon, also arrived this month. She was found in the garden by a couple living in Lima, most likely escaped from her former owners. At the time unable to fly and sickly they took her into their care, and since then have found out many things about Flora and her species. Her owners brought her all the way from Lima, as they were going to Germany. They had learned that this species should not be held as a pet and should return to its habitat. Unfortunately, since Flora is very tame it will not be possible to release her again, she would not know where to find food, nor be up to the challenges of living in the wild. After her quarantine period in the clinic she will be moved into Pichu cage, where we are sure she will find a partner and/or friends among the other Amazons.

With a lot of construction projects going, Douwe and Geiler were happy to have some extra hands helping them out this month. Gelimer, a brother of Geiler, stayed for 2 weeks in Bello and helped out. Geiler was able to finish another cage in the quarantine, while progress could be made with the new Zambo cage for the margays.
Thanks to the donation by the company in Holland, De Graaf Afbouw, we could start this new enclosure swiftly, as it won’t be long before the margays will need more room or potentially separating for a period of time.
When there are sufficient volunteers, one or even two can enjoy some construction as well, especially when they are willing to work several days a week in construction. This helps Douwe to get a lot of jobs done, like the rebuilding of the interiors of cages like Pichu, Igor, La Sapa and Rimaq. Hopefully we will continue to have enough volunteers with interests in construction as well as in animals, so we can continuously have volunteers helping out in construction. So if this interests you or if you know somebody that might be interested, we are very happy to receive your help here in the jungle !

This month the football table arrived ! Both in the lunch break and in the evenings the table is very popular, with the family, the workers and the volunteers enjoying the game. The first volunteer-tournament was played, which got so exciting that the family could hear the excitement all the way over at their house !
We are very happy to welcome Craig back home again ! So with Puck and him running the show, and Emile as veterinarian at their side, the family was able to go on a well-deserved holiday in Peru.