This March was another relatively dry month with unusually infrequent rain. Normally this would surprise us but this month we barely seemed to notice. Read on and you’ll find out why. 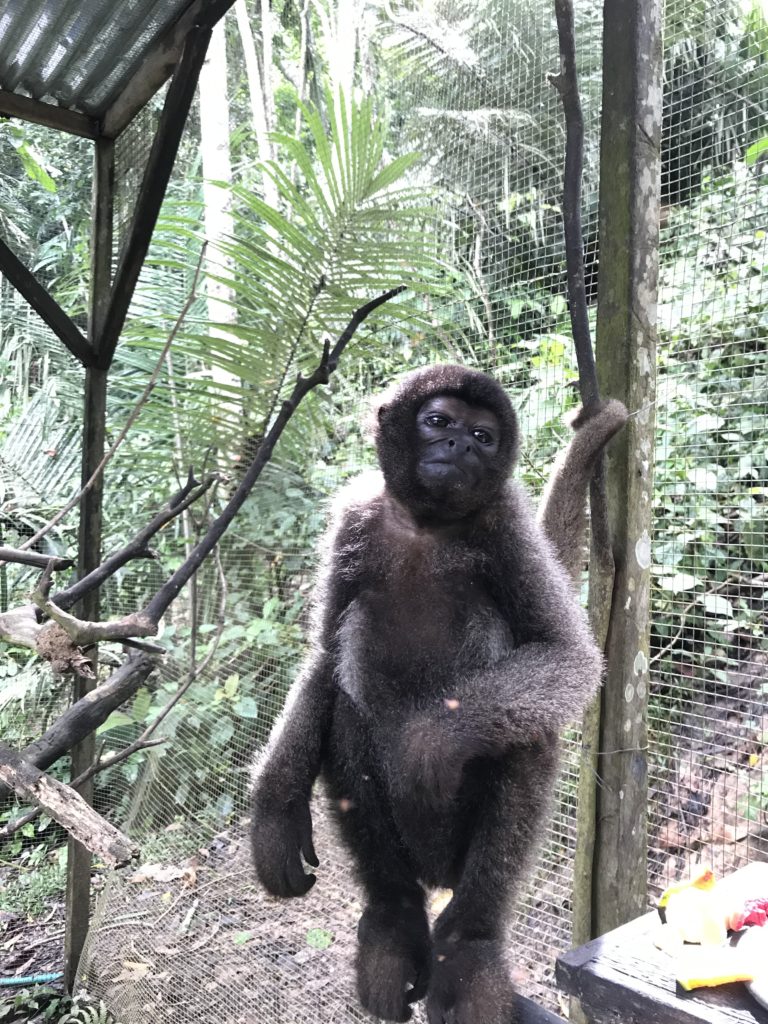 Unfortunately, Uma (female woolly monkey) isn’t doing very well. Our released woolly monkeys are all struggling with a parasite called ‘’Prosthenorchis Elegans’’. This parasite, carried by beetles living on the ground, attaches itself into the inner wall of the intestines. All our woolly monkeys have been treated with anti-parasite medication however currently there is no known cure for this parasite. Unfortunately re-infestation in the jungle is continuous, so any treatment never cures the problem. The other monkeys have responded well to a course of treatment but Uma appears to be very unwell and has lost nearly 30% of her body weight in the last twelve months. Uma is now in the Roko enclosure where we are able to monitor her progress more closely and ensure she is getting the best diet, medication and care we can provide. So far this has had positive results and Uma has gained just over 100 grams (4% of her current body weight) in the first seven days of treatment. 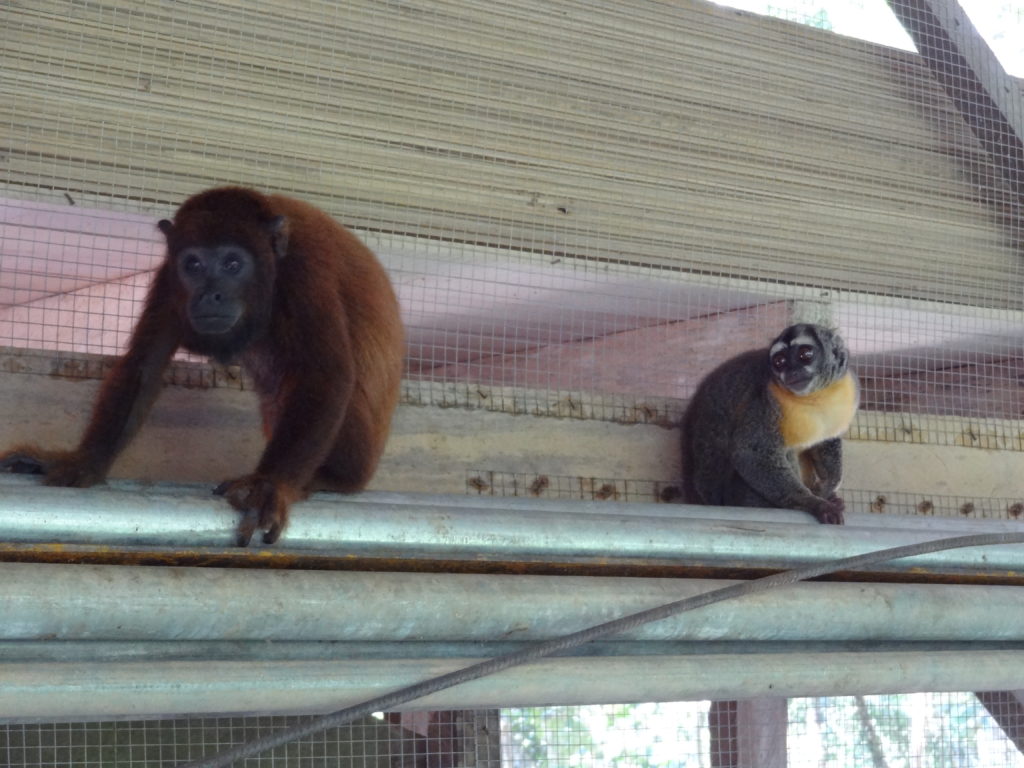 Sira (adult female night monkey) recovered well from the wounds she most likely received from another monkey. She returned for a few nights to her favourite resting spot however one day she wasn’t there and she was seen instead at the quarantine site. After that she was seen on one occasion during the night, before disappearing for good. We think she most likely has had enough of the other species of monkeys and has moved deeper into the jungle. We hope Sira is well and someday finds herself a mate out there in the wild.

Mokwai and Rumani (Crab eating racoons) are taking their first steps into the wild. Over the last month we have seen them initially being walked by Douwe on a leash, and as they have become more comfortable, walking freely with Douwe and some of the volunteers. It is slow going but also very positive to see them out enjoying and experimenting in the unfamiliar territory that will one day be their home.

If February wasn’t as frantic as previous months, March more than made up for it. Fortunately, Olivia was given a days’ notice that a thousand birds had been confiscated from a bus travelling to Lima to be sold on the local and international market for exotic pets. In just one afternoon, all the animals currently in the clinic needed to find new lodgings, and all clinic cages were thoroughly cleaned and set up to accommodate the new arrivals.

Roxanna (Collared peccary) was moved to the front cage of the Rincay enclosure, right next door to the two older peccaries (female Kohana, and male Timo). This move will allow them all to become familiar with one another prior to formal introductions. So far this seems to be going well and all three have made contact through the wire fence. 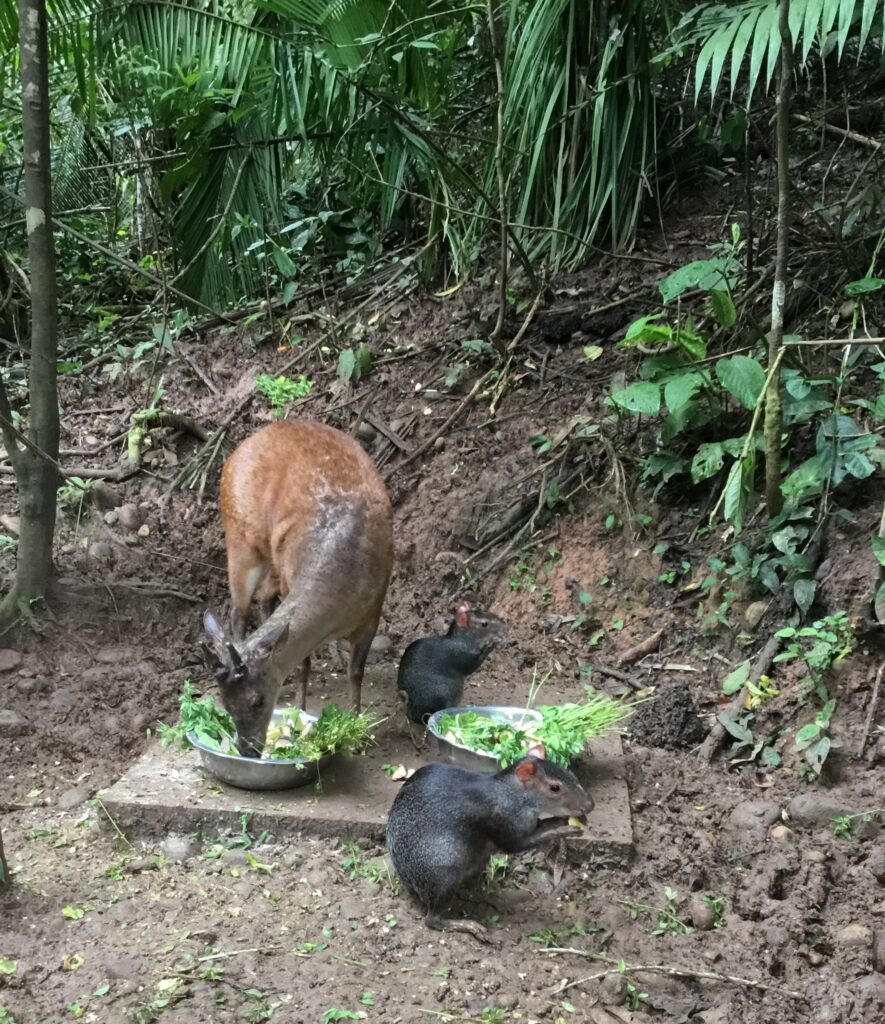 Jope, Dakiri and Rabito eating together

Jope (male agouti) and Dakiri (female agouti) were moved to the Pepito enclosure, where they joined Ringo and Rabito (red brocket deer) and Doquino (male agouti). Initial introductions saw Jope asserting his authority but as the days progressed all three agouti and the two deer appear to have accepted the new living arrangements and life is peaceful once again.

Nayro (baby male large headed capuchin) is growing up fast. This month he took the huge step of moving out of the clinic into an enclosure with the slightly older male Burbujas (large headed capuchin). The introduction was done step by step. At first, he started with short visits, staying for only a few hours at a time. As he became more confident the visits became longer. As they both got along so well, Nayro has now officially moved to Burbujas’ cage permanently. They both share one plate of food, and Nayro still gets his milk 3 times a day. This is a positive change for all; Burbujas has some company and Nayro has someone to look after him.

Although recovering well, Rafiki (Blue and yellow macaw) was still a resident at the clinic, as he still needs attention and care. So as not to put him at risk of infection or disease from any of the arriving birds and due to the lack of available enclosures, Rafiki was moved to the living areas of the Volunteer Accommodation. Rafiki is enjoying all the additional attention and has even been talking again. He hasn’t spoken since his fall earlier in the year, so this behavior suggests his condition has improved greatly. We are fortunate enough to have a veterinarian volunteer on site this month and she is undertaking some physiotherapy with Rafiki who appears to be responding well. 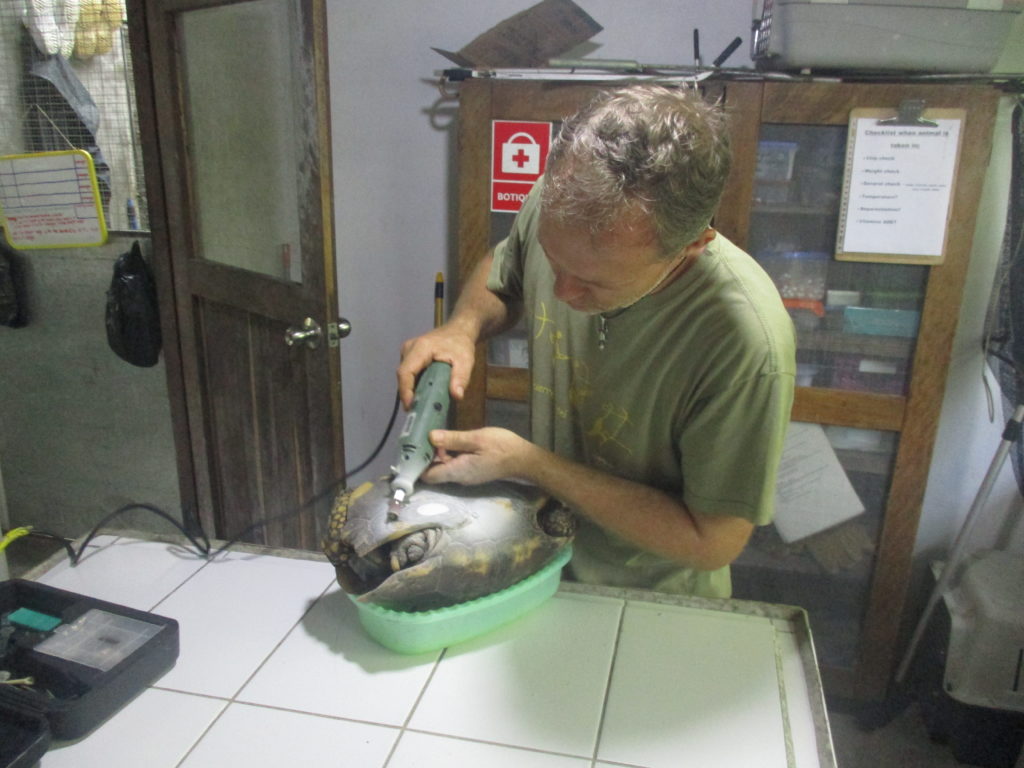 A long-term clinic resident Optimus (yellow footed tortoise) was found to have a wound on her chest. She is a tortoise with a missing leg and because of this, there was too much pressure on her chest. This pressure caused a crack at the bottom of her shell. Douwe thankfully was able to fix the crack, and now we await Optimus’ original injury on her front leg to heal. Once fit she will join some of the other tortoises in the Reptile enclosure.

796 white winged parakeets, 14 orange winged amazons and 11 blue and yellow macaws.
As the statistics would suggest this many birds at one time was a logistical nightmare…

Although a little daunted, our team took it all in their stride. The experience of the management team combined with the enthusiasm of every volunteer ensured all these birds were quickly assessed and settled into their new home. Every Amazon and Macaw was weighed, given a thorough health check and treated with anti-parasitic prior to being housed. These enclosures will be their home for the next six weeks during their quarantine period.

Unsurprisingly given the cramped conditions of transport there were 13 parakeets dead on arrival. The first few days of quarantine also saw many birds dying, on the worst day the count numbered 40.

There was a huge range of emotions felt by everybody involved on that initial evening – feelings and emotions that intensified over the weeks, and at times boiled over. It is hard to watch these once wild animals suffer and die, all because of the illegal wildlife trade. Animals you care for and share you body warmth with, which you are later forced to witness take its last breaths. Dealing with these scenes and the emotions that come with them are some of the hardest aspects of the work we do. Olivia and Douwe have been dealing with the scenes for nearly twenty years, but it is humbling to watch them at work. Their attention, care and compassion is still so very apparent with every single animal. Truly admirable!

All these Macaws and Amazons, 25 in total, had been removed from the nest at a very young age. Unfortunately they will need to remain resident at Esperanza Verde as they do not possess the necessary skills to be released. Thankfully in the case of the Parakeets we aim to get them healthy and strong enough to be released back into the wild. We hope that they will eventually integrate themselves with wild groups we have nearby.

During this quarantine period, a lack of suitable enclosures means that conditions are cramped and each day presents a new challenge. For now we all look forward to the minor victory of getting these animals into more spacious accommodation once the quarantine period is over. In the interim full credit goes to the entire team who are working tirelessly to ensure all animals at our rescue centre are getting the care and attention they deserve.

These times prove over and over again how valuable our work is and how important the volunteers are for Esperanza Verde. It is amazing how everybody pulls together to care for these animals, even if it means working late into the night and even giving up some of our human food! However hard we work, the harsh reality is that we cannot save them all. We knew that we would have some harsh weeks ahead of us, in labor as well as in emotions. For one person to have one parakeet as a pet, so many have to die. Sadly most people are ignorant to this fact and do not realize that their pet has cost so many other lives.

For anyone who would like to see how they were confiscated have a look at this link : http://www.actualidadambiental.pe/?p=54893

Without our devoted team of volunteers we would not have made it through this month. We would like to take this opportunity to say a very special thank you to the team of volunteers that was with us during this time: A huge thank you for all your hard work and devotion!

Where February saw the completion of the Elmo enclosure and great progress on the new quarantine, March demonstrated what can happen when we are forced to be reactive.

So much of this month has been lost to making cage modifications, moving animals as required, or just dealing with new issues as they arise, that progress has been slower than desired. However as the pictures show, perseverance pays off, and another layer of new bricks has been added to the walls of the quarantine.

Other minor upgrades are always necessary around the facility, such as new locking mechanisms in the Pepito enclosure. It seems the capuchin monkeys had again worked out the system and kept letting the deer and agouti into the front cage. Rather than secure the secondary gate with a wire, it has now been modified to require the monkeys to use two hands at the same time. This is working well so far and has already led to other gates being upgraded in a similar fashion.

Although rain has not been what we expect for this time of the year, paths within EV still require constant maintenance, and so stones were carried from the quebrada whenever we have spare (and willing) volunteers. Not an exciting point of construction, but still a vital task that takes up time in what often seems very short days.