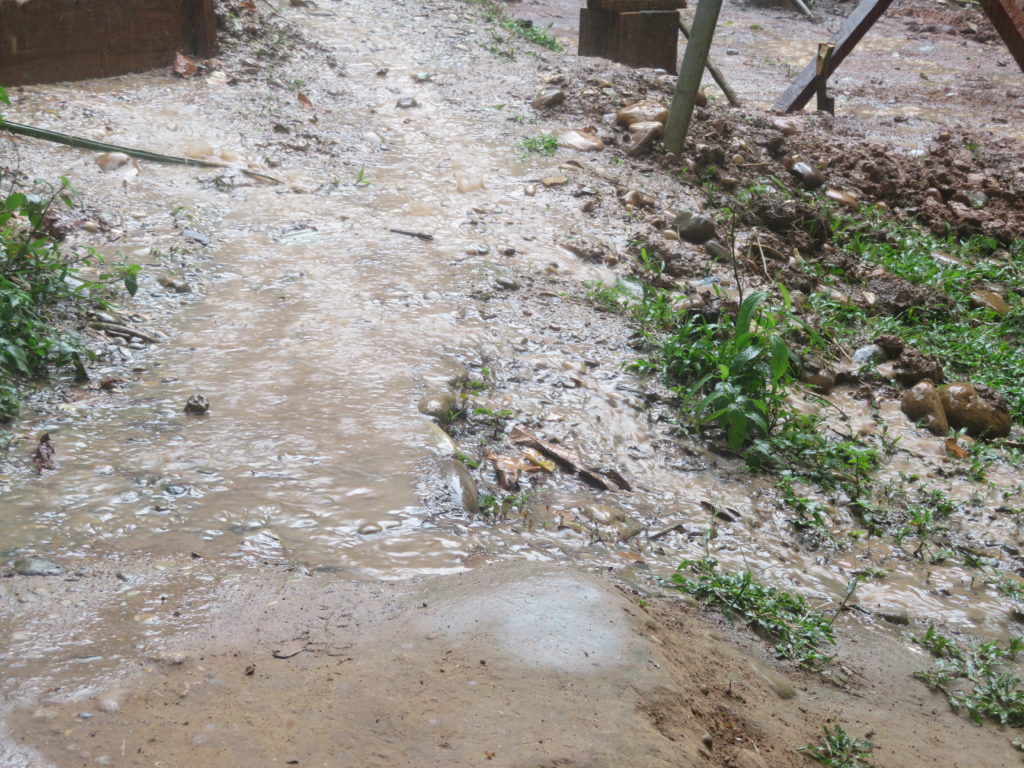 Not a lot of rain this month 😉

Variety is said to be the spice of life, and May delivered it in abundance. Side projects were completed, new animals arrived, animals were released and so much more. Keep reading for all the latest news from EV… 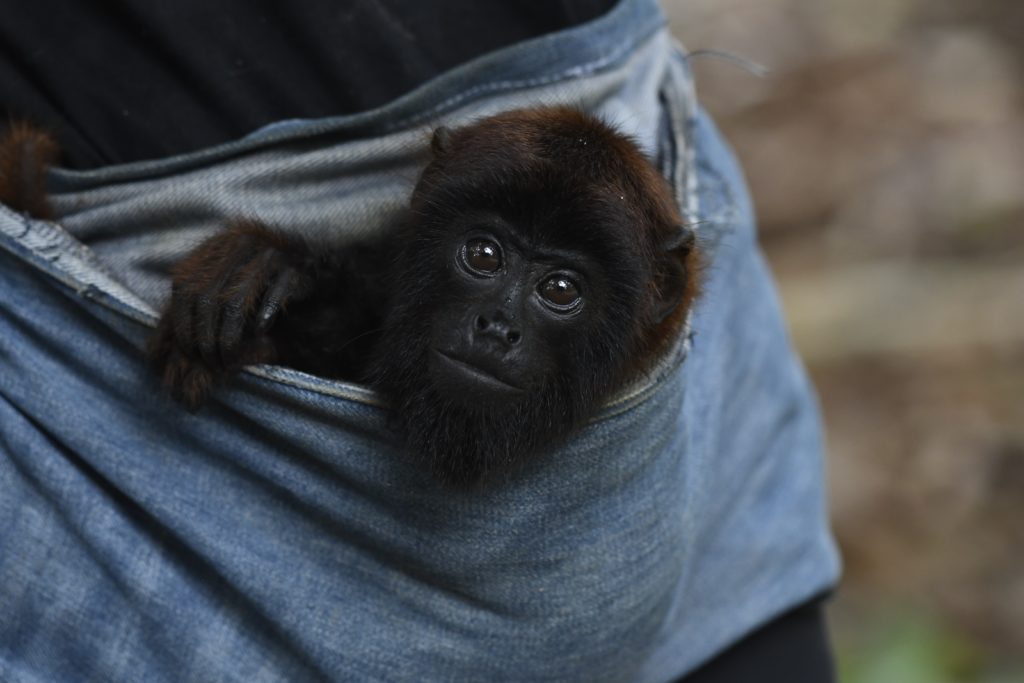 Armando, carried as a baby in a bellypoach

Armando (male howler monkey) is still under intense supervision but he is becoming more independent each day. He has a dedicated volunteer looking after him at all times and he is regularly taken to the plantation and port to look for leaves. Leaves are a vital part of howlers diet and he already has his favourites. The younger leaves are the best! Armando also spends an hour each day in the Pepe enclosure to give him some independence and to learn to feed himself from the food tables. We have raised several howler monkeys over the years and but so far Armando is proving to be the fastest learner. We hope that it won’t be too long before he joins the rest of the monkey troop in the jungle!

Earlier this month news reached us that a spider monkey has been spotted on a nearby plantation. Cumala, one of our female spider monkeys had not been spotted recently and so we instantly suspected it might be her. Sure enough when Douwe and Geiler went to investigate, they found Cumala sitting amongst the farmers’ crops. It is not uncommon for females to wander from the group when it is mating season. Given that she had strayed from our protected area of rainforest, the decision was made to capture her and bring her back to safety. Thankfully this went smoothly, and she is now back with the group. She will be enclosed for a short period before being released again.

Nayro and Burbujas, two male capuchin monkeys, arrived at EV some months ago. Their rehabilitation period had gone well and so we decided to try and release them. Burbujas was the first to venture from the enclosure and took it all in his stride. Nayro took a little longer and only ventured outside when Kres, a female capuchin monkey, ventured into the enclosure and carried him on her back. For their safety Nayro and Burbujas were intensely observed for the first few days in the jungle. The first interactions with the wild group are a tense period and we can never be sure if a new monkey would be accepted. Nayro encountered the wild alpha male Maku briefly in the first few days and even went on to harass an older male shortly after. He was testing his boundaries as all monkeys of his age do and thankfully the group took it well. Over the next few weeks their confidence appeared to grow daily and they were seen socialising with the high raking females. Despite their initial success, Nayro and Burbujas recently disappeared. The reason remains unknown. Whilst we hope for the best, there are many dangers in the jungle and despite our best efforts we cannot defend our animals from them all. 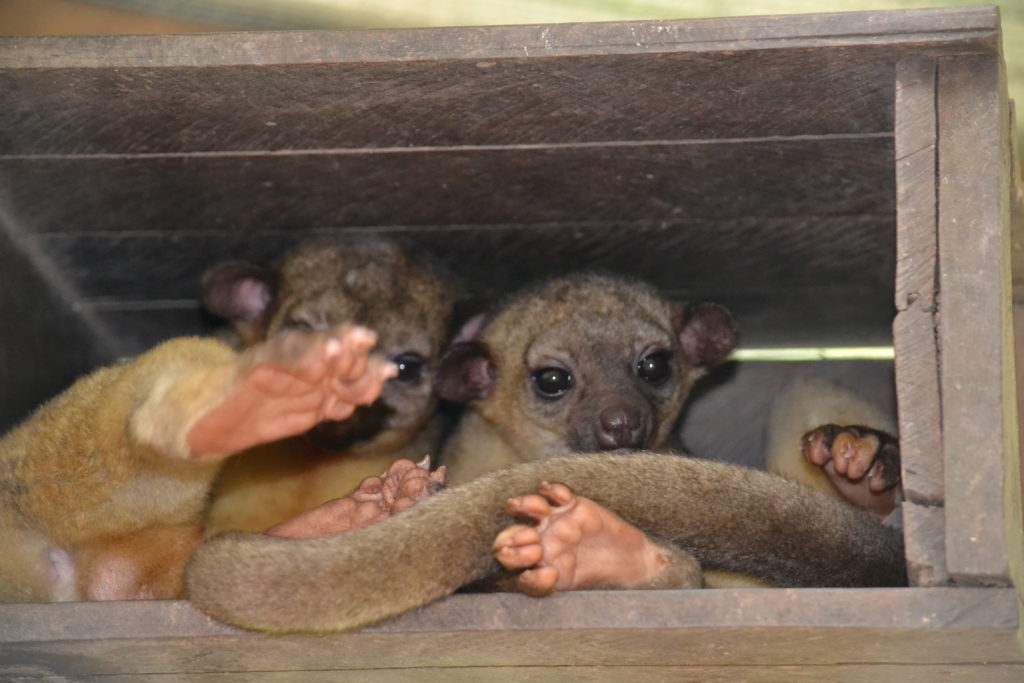 You might well have read about the earthquake in Peru earlier this month. During the night Douwe and Olivia were woken by the earth shaking, and then to their surprise they heard the call of a kinkajou. Douwe said it sounded like a young one, but as Kiko (a male we released) had often been found sleeping in a trunk under the house, they thought it was him. As the crying noise did not stop, Douwe went to investigate…. Turns out that the kinkajou that had been sleeping under the house was not Kiko but in fact Kila, the female we had released alongside him. Kila was nowhere to be found but had indeed been nesting in the trunk, as Douwe found a small baby kinkajou. Kila was out foraging. The little kinkajou was also woken up by the earthquake and was calling out for her mum. The baby is doing well. Kila is taking good care of her and is with her during the day. At night she leaves the nest to go look for food. Kila is a smart one and picked a safe spot for a nest, as no predator will dare to come close to her baby with Douwe and Olivia as guardians!

Grety, the female margay, is doing well and growing everyday. She gets a little more confident and a little more feisty each time we visit her. Grety is always happy to see us coming, as our volunteers bring new enrichment or her daily leaf parcels of meat or chicken.

Our crab eating raccoons, Mokwai and Rumani have been growing big time! They always enjoy their daily fish portion and venturing out with our volunteers to explore the local jungle. These walks are an important part of their rehabilitation process. The more confident they are in the jungle and the more their independence grows, the better chance they have a surviving in the wild.

This month we finally had some enclosures empty in the clinic and so we were able to finish the improvements started a few months ago. Our team have been working hard putting in new cement feeding tables. By taking advantage of the empty cage we were able to shuffle the residents around, and all four cages have now been upgraded. These new instalments will make the enclosures easier and faster to prepare when new animals arrive.

Two young dwarf caimans were handed over to Douwe in the village. The parent had been caught in a fishing net and was killed for meat. Thankfully the two young ones were taken by a good Samaritan and given to EV. After a short stay with us they were released, as there is plenty of fish in the nearby river to keep them sustained.

On Olivia’s return from Pucallpa, we were all privileged to meet her latest travel companion Yuria (female Equatorial Saki). Yuria is another first for EV as we have never had a Saki monkey before. At approximately 12 months old she is a sub adult. She has spent her entire life in a cage and was seized by the government. As our experience with this species is limited, it has been a slow process to establish a routine for Yuria and to work out her preferences and the ideal healthy diet. As her requirements are similar to that of the howler monkeys, it is envisaged she will join both Ramon and Darwin in the Pepe enclosure at the end of her quarantine period.

Unsurprisingly, as it always seems to work this way, no sooner than some enclosures were empty, they filed up again! On the weekly Monday shopping, Olivia was called to pick up a woolly monkey that had been held as a pet for about 6 months. The owner had left Curimana and left the monkey behind. Thankfully we managed to get hold of him before he was sold on again. He is called Panki and is now in the SUST Animal Orphan Hospital undergoing anti-parasite treatment. Our outside woollies are showing a lot of interest in him and Loki especially is spending a lot of time hanging in front of his window, which is always a good sign.

Tonka (male Andean Saddleback Tamarin) has settled well into a larger cage within the clinic. With consistent weight gains we feel he will soon be ready to release, all we need is the group of wild tamarins to show interest. Under normal conditions, the group should accept him and take him along with them. 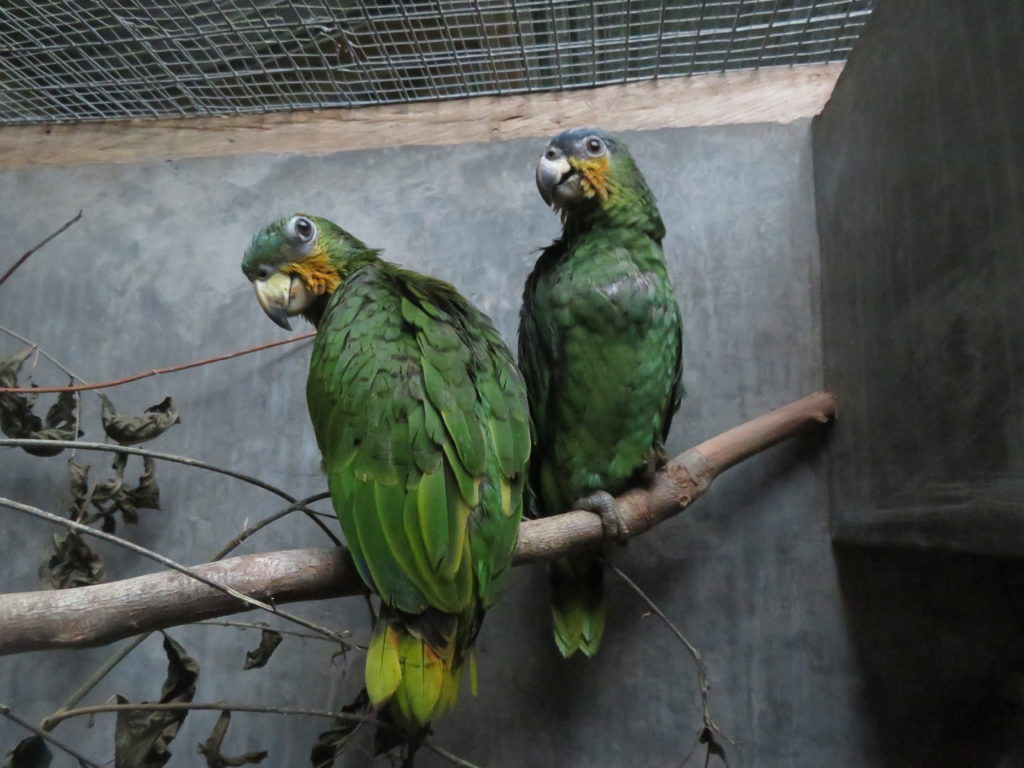 Mayla and Sayani. Chilling, no Netflix

Sayani, and Mayla (orange winged amazon parrots) remain in the clinic and are being treated and readied to join the other birds in the Igor enclosure. Sayani has made good weight gains (6%) in the last month, while Mayla remains static neither gaining or losing weight.

EV living just got a little bit easier. The Secadoria (new drying room) was completed and within the day, full of volunteers washing. Everybody is grateful to have a weatherproof area secure from monkeys to hang their washing to dry.

As reported last month, a great deal of moving of animals has taken place in the previous 10-12 weeks, which has had a huge impact on the new quarantine. Although visually it appears that progress has stalled, that is not entirely the case. Across the river, Douwe and Geiler have been hard at work constructing doors and windows. At last count there were eight windows and ten doors near ready. We don’t yet have anywhere to hang these doors, but it is still impressive to see the amount of work done, given all the ongoing general maintenance required for a project of this size.

This month the volunteers organized a quiz night one Saturday night. With four teams randomly selected and bragging rights up for grabs, enthusiasm was high! Douwe was dragged from a seldom empty family house to come and join the revelry, and we all had high hopes for him being on the winning team (because the boss should always win). Sadly, this was not the case and like his, many others’ hopes were crushed too. The winning team of “Three Tree Turkeys” won by a resounding two points and managed to rub salt into the wounds of everyone else for the next two days. We all look forward to a rematch!