Since the end of August, we have had three young monkeys living in Pepe cage: Takari (young male spider monkey), Mashi and Almira (young woolly monkeys). It was time for them to join the outside monkeys. After opening the door, it took a bit of time for them all to go out. Mashi and Almira quickly made contact with the rest of the woollies. Takari was quite shy to begin with but showed interest with our oldest female spider monkey Yanay. Yanay and Maruja (female woolly monkey) have taken on the task of looking after our most recent releases. For the moment they are let our in the morning and brought back in at night so we can make sure they’re eating enough. It is wonderful to see how the other monkeys take care of them and how much they are enjoying the outside life.

Nera, one of our released adult Capuchins, recently gave birth. The newborn seems to be health and as Nera has successfully raised her first born, Namaru, we have confidence that this little baby grow strong as well. As soon as we know the gender it will be named. 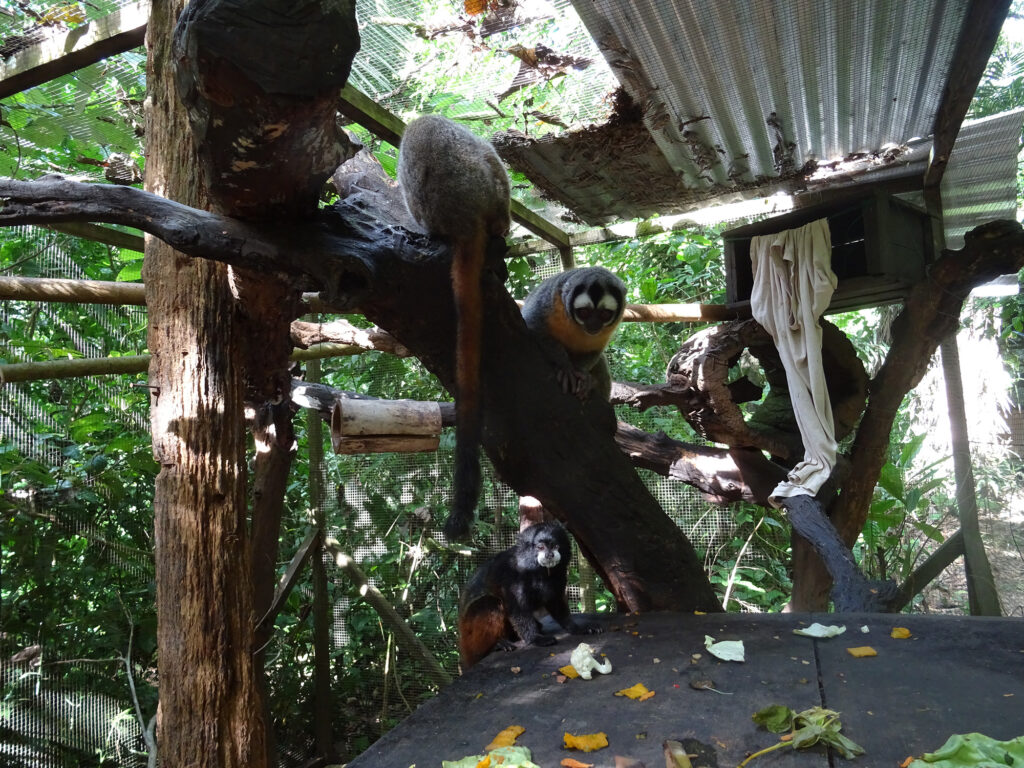 Moira, Maru and Tonka in Tiliku

In the August update we wrote about Tonka, a young male Andean saddleback tamarin, and Maru, a male Ma’s night monkey. We had planned Maru’s and Tonka’s release, sadly Maru’s introduction to our released night monkeys hasn’t gone smoothly and he had a finger injured by them. For this reason we decided to move Tonka and Maru to Tiliku cage, where Maru will have some distance from them.

Fonzo (young male capybara) is a favourite animal for many volunteers. This means he always gets lots of special attention during the day. This is a fun, but also a necessary task; we want Fonzo to stay tame, as he can’t be released. This will make any future medical treatment easier for both him and us. As he is growing bigger it was time to move him to a more suitable enclosure with a large pond to swim in. In the Rincay enclosure there are several yellow-footed tortoises, so before the move, Fonzo was introduced to one of them in see how he would react on this species. Fortunately, there were no problems and, it was time for Fonzo to be moved to the Rincay enclosure. It only took 10 minutes before he took his first dive in the pond. He stayed in the pond for quite some time, enjoying the space to swim, and then wandered round the enclosure, making acquaintances with the rest of the tortoises, among them Pepito (the first tortoise in EV) He also took an opportunity to greet the peccaries in the neighbouring enclosure before heading back for another swim.

Daytona (young female large headed capuchin) was moved to the Pepe cage, joining the three residing baby monkeys (Takari, Mashi and Almira). For now she stays in during the day while the other three are outside. At night she sleeps on top of Takari, the young spider monkey, (stealing Mashi´s favourite spot!). After a few weeks she will also join them outside.

Moira (female Ma’s night monkey), who arrived here with a broken leg and several other wounds from a dog attack, has been recovering well. After being confined in a small cage so that her leg would get the rest it needed, we recently moved her to a bigger cage in the clinic so she could start using her muscles again. Her leg will never fully recover, but she can climb again and move around sufficiently. She improved quickly thanks to all the extra attention, special mixes and vitamins she was given. Since we were moving Maru and Tonka, we decided to introduce her to Maru at the same time. Initially she was frightened of Maru but after some time she seemed to understand his intentions were friendly and they had their first nose to nose contact. Tonka also accepted Moira quickly, he must be relieved now that Maru has someone to play with during the night.

Marlon heard that some kids in Bello Horizonte had a snake in a small wire mesh cage. Douwe managed to retrieve the snake and took it back to EV. The red-tailed boa, Oba, had been trying to get out and wounded his teeth on the mesh. After some treatment we kept him in a special designed cage for snakes (without mesh!) to give him some time to recover. He recovered well, shed his skin, but refused to eat the rats that we tried to feed him. He was more afraid of us coming close than the food. Shortly after his shedding we released him so he could start hunting for himself again.

Delta (orange winged amazon), was brought from the ministry. One of the wings is permanently damaged so Delta will never be able to fly. She has not been handled a lot or mistreated, as she does not like humans coming close, but she does seem to enjoy it when Alex makes funny sounds for her. 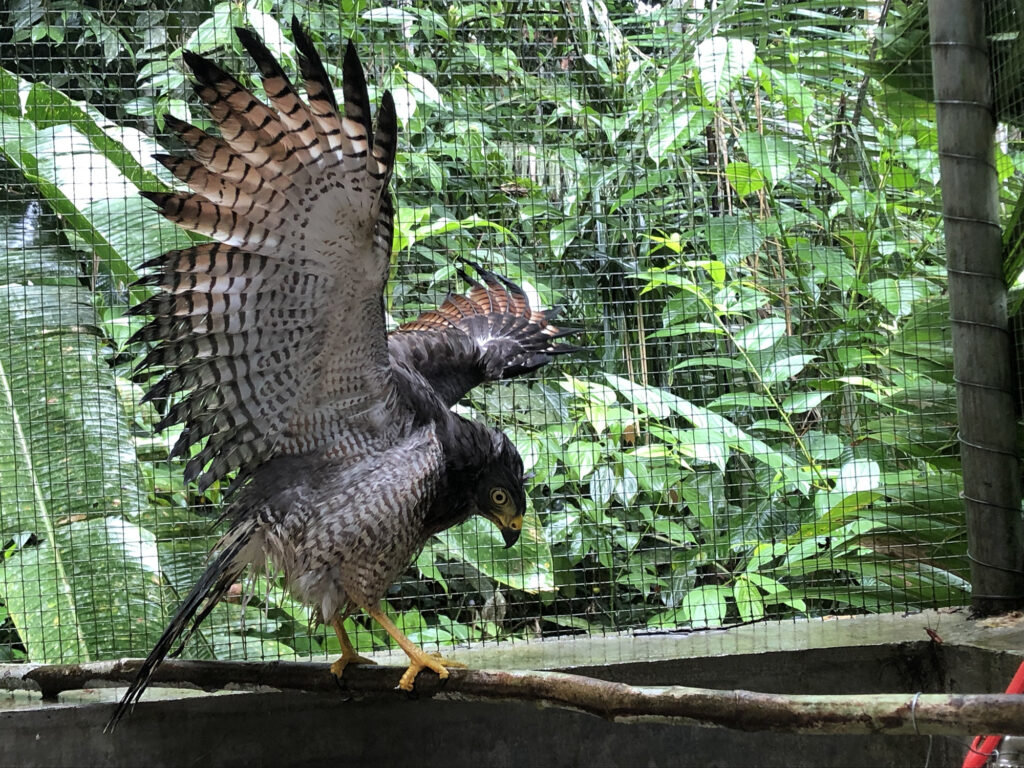 Kike, a road side hawk was received from the ministry after having flown against a window. He had some minor injuries and appeared to be wild and very cautious around people. After a health check we moved him in the Aguatena enclosure, so he would not get used to being around people, and we could observe he flight ability from a distance. We opened the cage doors to release him a few days later. In the beginning he did not leave the cage, but soon, after his audience of 3 volunteers watching left, he found the courage to fly out of his cage. This further strengthens our hope of his survival due to his reluctance to be around people. 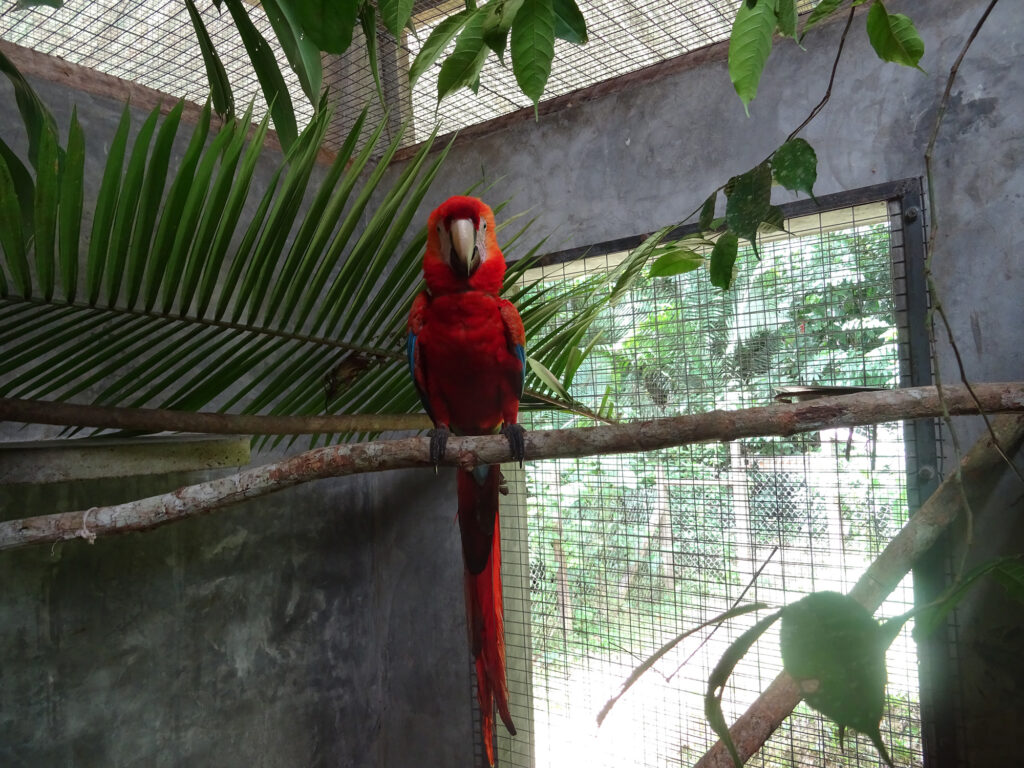 The Ministry also dropped off Manto, a scarlet macaw. The first few days Manto hardly ate anything, so we started moving some branches around in his cage and tried to give him food in different places. He started eating more after a few days, possibly because of the changes or maybe just because he got used to his new home.

Ezra (a young female spixs white fronted capuchin) was given to us from a local family from the village Bello Horizonte. She is still tiny even though she is already 9 months old, probably due to malnutrition. Since being at E.V. she has already started gaining weight, and we expect to see a lot more growth in the upcoming weeks. Ezra is quite afraid of people, but otherwise she seems to be doing well in the clinic.

The last arrivals were three baby birds (two ruddy ground doves and a blue and grey tanager). They were found on the floor in the village and handed over to us. Most likely they were trying to fly out of the nest for the first time, or were disturbed by predators or humans. The three of them stayed in a cage at the family’s house the first night and were then moved to the clinic, where two of the volunteers and Olivia took care of them. They needed hand feeding in the beginning, but incredibly quickly they have learned to pick their food by themselves. The blue grey tanager, named Dido and one of the ruddy ground doves, named Hercules, have been the strongest from day one, and are taking every opportunity to fly out of the cage. The other ruddy ground dove, Ewia, needed extra care in the beginning but now picks her food as well as Dido and has finally decided to spread her wings as well. Soon they will join the other doves and non-releasable birds in the Igor enclosure.

This month Douwe, Geiler, Hugo, and occasionally a volunteer have removed the old Roko cage to construct a new, larger and more stable cage in the same spot. We were able to do this thanks to a donation of The Monkey Sanctuary (Wild Futures) in Looe in the UK. It will be named Lulu in memory of one of their first woolly monkeys.

Firstly, thirty children from the kindergarten from Curimana and several parents and some teachers were shown around by Douwe. Of course with so many monkeys outside some extra guidance was needed. Olivia, three volunteers stayed around, with Geiler enclosing the group, so no monkey would bother the group and no child or parent would try to touch an animal. Although the group was quite big everything went very well, and Douwe could explain a lot about the animals. By improving the knowledge of animals and their wellbeing we hope to discourage them from having them as a pet or putting them on the dinner table.

A group of representatives of the National Forest and Wildlife Service, SERFOR, visited the centre, as part of a workshop they had in Pucallpa about wildlife. The group included several administrative officials, representatives of the Ministry of Fauna and Flora of Pucallpa, and several veterinarians. They were especially interested in learning about how we handle different animals, what are the problems we encounter on a daily basis and how we solve any problems we encounter. It was an interesting visit with Douwe and Olivia exchanging knowledge and showing them through the centre. 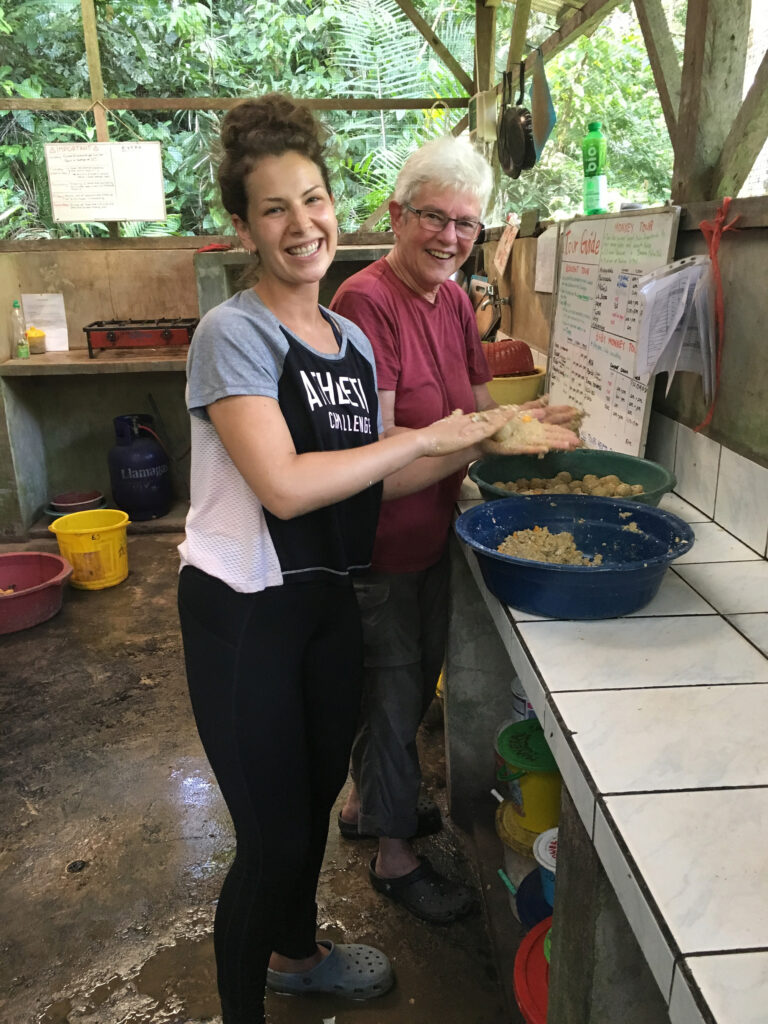 We welcomed the arrival of 3 new long-term volunteers who all have different areas of expertise: returning volunteer Karole who will mostly work in construction and in the clinic. Student-intern Carla, who will help Olivia with writing animal protocols, and veterinarian Emile who will start helping Olivia in the managing of the SUST AOH. On top of this, a good friend of the family and yearly returning volunteer, recently arrived and so the group is growing once more.

Since the group was big enough to also spend some time on extra jobs, we decided to give the opportunity for some people to experience some reforestation. Machico took the volunteers who were interested into the forest with a big backpack of trees. Together they managed to plant 52 new young trees.