Finally the rain season seems to have returned, so the water pump can hopefully be stored away soon. Olivia came back after 6 weeks on Holiday, throwing Marlon’s 10th birthday party as well as celebrating her own. Besides the happy news of rain and Olivia’s return we have also gotten a lot of extra tasks done, with the clinic empty for the time being. As always, when it empties out it also quickly fills up!

The beginning of this month quickly got us on our toes, as Kres (female large headed capuchin) managed to open the Rimaq enclosure, letting out our two adult male spider monkeys. (Lucio and Rimaq). When, Alex, our assistant manager, walked by the enclosure to find that they were not in there she quickly notified Craig and Douwe and after some time we managed to get the two spider monkeys back into the cage without any accidents.

Lucio came to us after being confiscated from the circus and has been at EV since September 2014. His former owners broke off his canines so that he wouldn’t be too much of a danger when people took photos with him during the circus act. He is still a strong monkey though and can easily cause problems. He is very used to humans and would love to hug anyone he found, or worse. Rimaq came to EV with a female spider monkey Yanay in August 2014. They were both found in a cage near the road going to Pucallpa. Compared to Lucio; Rimaq does have his canines, and they are quite impressive. Due to their size and strength both of these monkeys will not be able to live outside in semi-captivity, like many others do at EV.

As Kres has been causing so many problems lately, not to mention the risks involved, we made the decision to close her in with Lucio and Rimaq. She entered the cage herself, and seems to be happy enough in the company of the big boys.

Nera, one of our adult female large headed capuchins, is quite pregnant! We estimate that it could be less than a month before she gives birth. Cross your fingers and keep an eye out in the next newsletter for some baby pictures!

In other monkey pregnancy news, although early in season, the first squirrel monkey baby has been spotted. Silvana (released several years ago) being the already experienced mother. 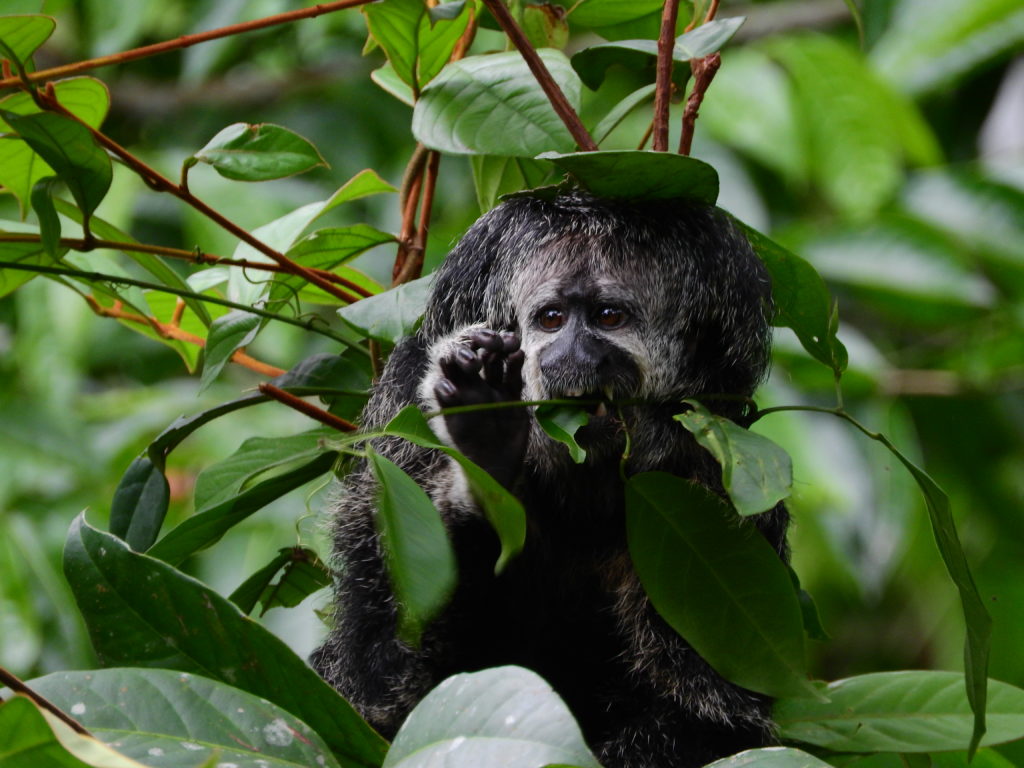 Tito has finally started gaining weight again which means that he and Yuria (male and female equatorial saki) are now allowed out during daytime. Weight is not the only thing Tito has gained; he finally seems to have found some confidence and courage to wander a bit further away from his cage during the day when they are both out. He’s becoming quite a climber even though his skills cannot compare with Yurias agility.

Sumo, male South-american coati, was released at the beginning of this month. With some trial and error, Suma was found to be Sumo and is enjoying his outside life. He tends to hang around the family house and spends a bit of time in the morning by the bodega when Douwe passes by to take Marlon to school. 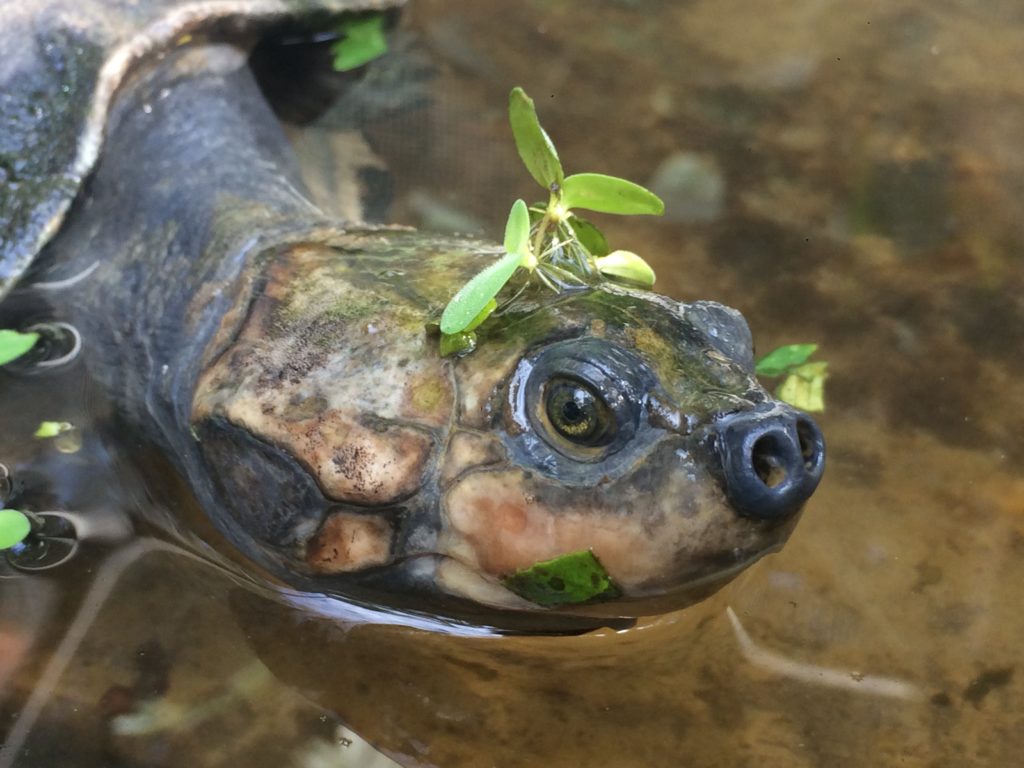 Smyke, the male yellow spotted river turtle, recuperating from a swollen leg in the Aguatena seemed to be recovered enough and was brought back to the reptile pond in the reptile enclosure. Volunteers checked on him each day and he seemed to be doing ok. But one day a volunteer came with the sad news that she had found Smyke dead in the pond. We were unable to determine the cause of death. 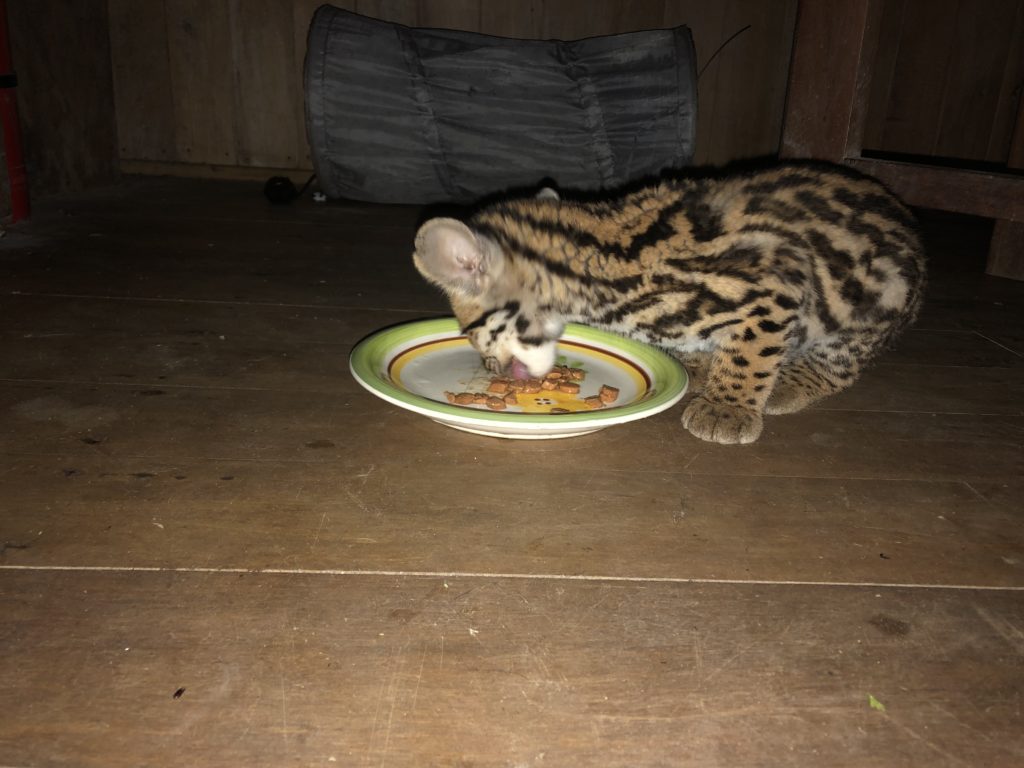 Diego, the small ‘ocelot’ who stole everyone’s heart last month when he arrived, was determined to be a margay after all. The similarity is very close except for the tail length which is shorter with an ocelot, while Diego kept growing, so did his tail! So far he is still in care by Olivia and Douwe and has just started eating solid food. He is a playful little cat who has rapidly learnt how to climb everything and jump everywhere.

At the beginning of the month the four birds up in the clinic were introduced to the Pichu Aviary having completed their quarantine period. Kit (festive amazon), Rodi (Mealy amazon), Tango (Orange winged amazon) and Aleesa (scarlet macaw) all seem to enjoy being able to spread their wings and chitchat with the other birds.

With the birds gone it was a unique time with no animals in the clinic! A perfect time to clean house and do some repairs, like new mesh for all the windows. With or without animals the clinic is always busy during the day, milk for the baby monkeys is prepared here, Armando, the young male howler gets his food here, and the faeces of animals in the outside enclosures are checked. It was also a perfect timing to give a round of de-parasitation to all of our outside woolly monkeys.

As always the clinic is never empty for long. The ministry brought us an opossum, a night monkey and a capuchin. You can read more about them below.

We received a male adult opossum which had apparently wandered into the storage shed of a university in the outskirts of Pucallpa, and was caught and brought to the ministry. After a quick health check which showed him to be a very wild and healthy individual it was decided to release him at our nearby plantation.

Daytona (juvenile female large headed capuchin monkey) was a pet before being seized by the ministry and brought here. She is a bit skinny, not too tame, and very active. She is being treated for parasites and will have a good chance to become part of the outside capuchin group in the future. For now the clinic volunteers have to come up with some nifty enrichment for our new energetic arrival.

Moira (female Ma’s night monkey) was found when some dogs got hold of her. Luckily the dog’s owner got her out and handed her to the Ministry. As she reacts calmly on handling we assume she has been a pet. The dogs got her badly; she has a broken leg, a bruised arm and other leg and a wound in the inner jaw. With monkeys it is really hard to make a sort of cast since they are very interested in everything and will most likely tear it apart themselves. We keep her in a small cage so she can’t move too much and hope the leg will heal enough in the position it is for her to start using it at least partly again. She is eating and drinking, and after a week she has started to move a small amount. It will take some time and we hope she will fully recover.

After some time with no electricity in the village Bello Horizonte, Douwe was finally able to complete the welding of the doors and windows for the Quarantine. It has made a remarkable difference when you view the quarantine from the outside. All that is left are the finishing touches of clips etc. on the doors before the focus can switch to the inside!

And as well after being one local worker short for a few months we are happy to welcome Hugo from the local village Bello Horizonte to our crew! A well needed help for Douwe and the other workers. He has been working in construction before, so he is now helping Geiler and Douwe on the Quarantine. Soon he will start on other construction projects that are still in the plans.

And last but not least, a big thank you to Ursel and Peter Kraus for the new scale for our quarantine facility.

Machico, who has been working with us since the first year took the volunteers on a forest walk. It was rainy but they managed to see a lot of amphibians and beautiful nature.
A trip to Regalia proved beautiful as always, the volunteers got it all to themselves and managed to see several species of birds including hoatzins and kingfishers. We celebrated Olivia’s birthday at the family house combined with a fun quiz night, had some cocktails and even did some dancing.

Sadly our New-Zealand long-term volunteer and overall assistant Craig left for home, but we will happy to have him back in 2020. He has been a great assistant to both Douwe and Olivia and we thank him for everything and we hope he has a great time with family and friends at home.