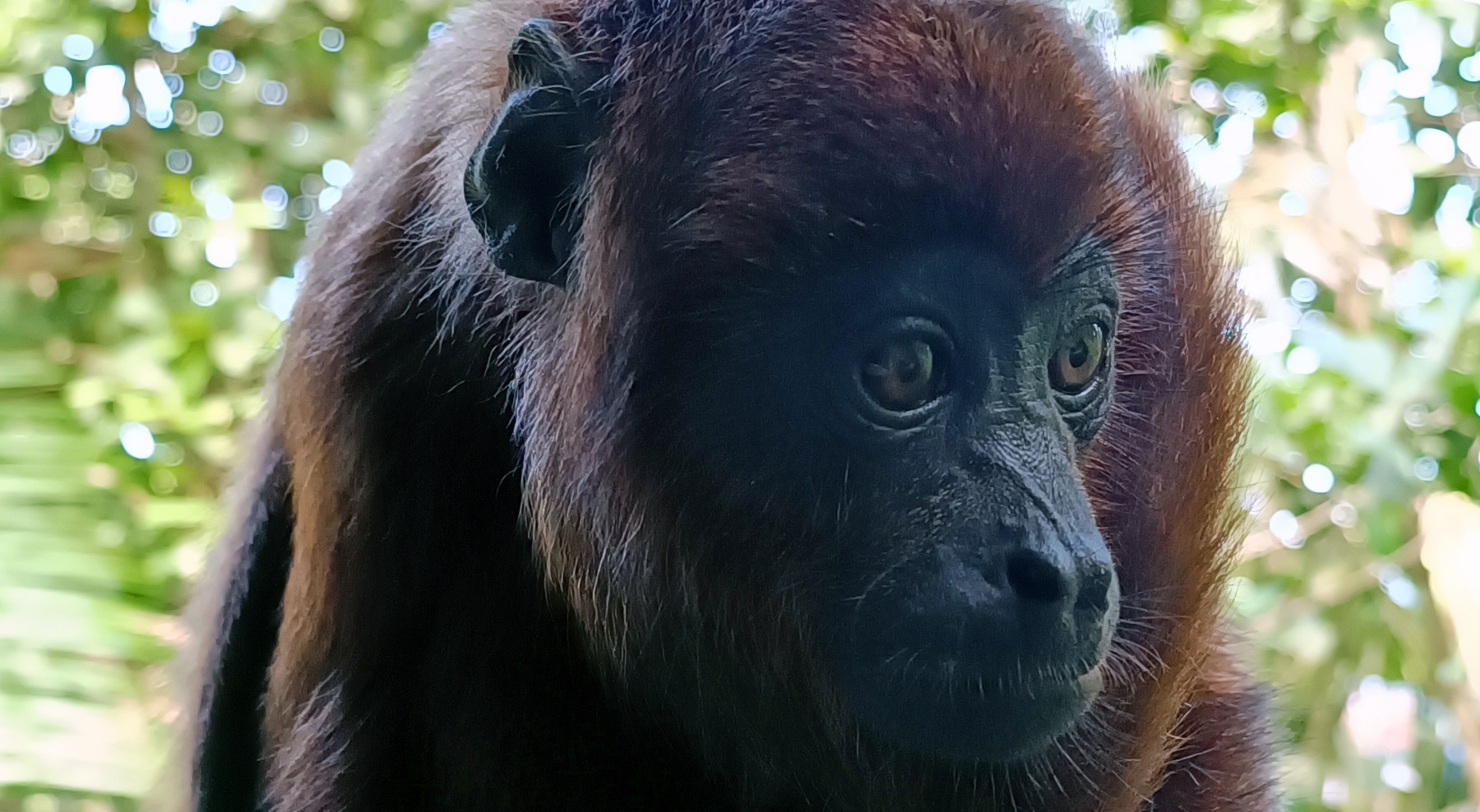 May was another eventful month with both good moments along with some sad ones.

Olivia, Kayla and Marlon returned home this month after a well-deserved break in Holland. With the permanent team complete again and a steady group of volunteers, EV returned to a semblance of normality.

Maida (female howler monkey) has been doing very well outside and often seen playing with the woolly monkeys. Most of the time she spends the night with Darwin in the enclosure, but on some nights, she ignores even her vitamins to spend a night in the wild with the woollies.

Miyo, Ashuke and Alessi, the juvenile male spiders were released from their enclosure. At first, they seemed happy to explore the outside world, but they got very scared every time too many monkeys took interest in them. With the outside world seeming overwhelming to them, it was decided to bring them in again and start to bring some of the outside monkeys into the Lulu enclosure with them. Soon we will open their enclosure again and see if they have gained enough confidence….

Anishka, our female neotropical river otter, has been in the process of her release now for a while. She seems to have taken a liking to being a permanent tour, in which a volunteer takes her on walks during the day. Even though the aim is for her to roam free, most of the time she prefers to come back and sleep in the safety of her enclosure (Tiliku). She enjoys walking in the jungle exploring the waters, playing and frequently catching crabs, fish, and even a catfish of about 50 cm! And who knows someday she might find herself a partner!

Omar the new cobalt-winged parakeet was introduced to the other (non-releasable) parakeets in the Igor enclosure. It seemed to go well, but after a few weeks he was found with an injured wing and taken to the clinic. He was soon joined by Jack, another of our resident cobalt-winged parakeets, also suffering an injured wing. They are getting along well, and we hope they will recover with the extra attention and care received at the clinic.

Cesar, our male juvenile black spider monkey, unfortunately passed away at the beginning of this month. Volunteers had noticed he wasn’t his goofy self anymore and it quickly took a turn for the worse. Within a few days, even though treatment was started, he passed away in the presence of the volunteers at our clinic. A thorough necropsy was undertaken but revealed very little as to a cause for his demise. We will always remember him as the weird monkey walking on his hind legs with one arm up in the air.

Zeus, Ares and Athena (new blue-headed parrots) came from the quarantine to the clinic as two of them, Zeus and Ares sustained chest injuries from falling. Both came to EV with their feathers on both wings cut very short. Something that is done to avoid them from escaping. Unfortunately, they have been cut so badly that they can´t even break their fall while spreading out their wings, and basically fall flat on their breast. They have both been put in a smaller enclosures to prevent them from falling from dangerous heights. Athena, who has already started growing new feathers joined them later.

Otis (adult male night monkey), who has now spent months coping with a deep knee injury, started again with a new herbal treatment, as any other treatment has not worked. One of the volunteers with experience in natural treatment has come up with a plan and let’s hope it will help him. Otis has been in the clinic for a long time so hopefully we will see some change soon.

After spending some time in quarantine, Amora (chestnut-eared aracari) has now moved to Elmo enclosure. After some time in the smaller front part of the enclosure, Douwe guided her into the main enclosure while keeping a close eye on her. She quickly adjusted to the huge area, and is doing very well, standing her ground to all the big birds. Her big beak might help here as well!

Sencha (juvenile female coati) has finished her quarantine-period and has been moved to the Lucia enclosure near the general kitchen, where she is enjoying herself, digging in the dirt, making use of her nose and paws to find some nice earthy critters. Not surprisingly, Sumo, our outside adult male coati has now shown up, after hardly ever being seen in the vicinity, to inspect this new young female.

Yuno (juvenile male kinkajou) fully recuperated from his injuries sustained during his release last month, so we decided to give him another go at the wild world. So off he went and then already in his first week he apparently had another fierce encounter, this time coming back with an ugly bite in his nose and a small puncture in one of his legs. We know from our experiences with kinkajous in the past, it can take a long time, especially for a male, to make his own territory here, with already several wild Kinkajou living outside. But the successes in the past show us not to give up too quickly so after some time to heal again we will give Yuna another chance at finding his own territory and eventually a partner.

With a good group of volunteers, there has been more time to work on enrichment for many of the animals, even fish were caught for Takido (juvenile male crab-eating racoon), the margays and ocelots.

Darwins recent behaviour change and sudden interest in volunteers, which resulted in him needing to be confined. While in cleaning his enclosure, he bit one of the volunteers. Volunteer and animal safety are always primary concerns, so immediate measures were taken to modify Arana enclosure ensuring Darwin was able to be kept separate from volunteers when cleaning and feeding to prevent any further incidents.

Janick Jaussi, who officially said goodbye to his work as a volunteer about a month ago, was staying with his boat in Bello Horizonte to complete the finishing touches. He completed this and one afternoon sailed away for his big tour from here to Brazil ending his journey at the Atlantic Ocean. There was a little party on his boat before he left, and all volunteers sung him a song to wish him all the best and luck on his travels: sail away…sail away…sail away.

A welcome reprieve from the daily occurrences at Esperanza Verde is a trip to Regalia. After a busy morning preparing animals breakfasts and cleaning, the volunteers were rewarded with, a nice boat ride and a slippery hike, finally arriving at the beautiful waterfall ´Regalia´. Despite the buckets of rain from the day before, it turned out to be a very good day for a swim and some took the leap from the top of the waterfall!

This website uses cookies to improve your experience while you navigate through the website. Out of these, the cookies that are categorized as necessary are stored on your browser as they are essential for the working of basic functionalities of the website. We also use third-party cookies that help us analyze and understand how you use this website. These cookies will be stored in your browser only with your consent. You also have the option to opt-out of these cookies. But opting out of some of these cookies may affect your browsing experience.
Necessary Always Enabled
Necessary cookies are absolutely essential for the website to function properly. This category only includes cookies that ensures basic functionalities and security features of the website. These cookies do not store any personal information.
Functional
Functional cookies help to perform certain functionalities like sharing the content of the website on social media platforms, collect feedbacks, and other third-party features.
Performance
Performance cookies are used to understand and analyze the key performance indexes of the website which helps in delivering a better user experience for the visitors.
Analytics
Analytical cookies are used to understand how visitors interact with the website. These cookies help provide information on metrics the number of visitors, bounce rate, traffic source, etc.
Advertisement
Advertisement cookies are used to provide visitors with relevant ads and marketing campaigns. These cookies track visitors across websites and collect information to provide customized ads.
Others
Other uncategorized cookies are those that are being analyzed and have not been classified into a category as yet.
SAVE & ACCEPT